Spokes 8: The Hub of Being (Table of Contents) {Notes} 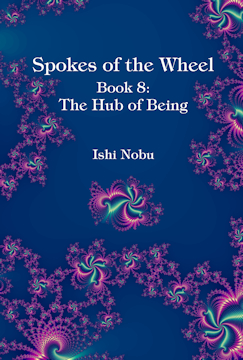 Understanding the nature of reality has ever been the ultimate human inquiry. Assumptions about how phenomena arise form the foundations of the different schools of philosophy, religion and science.

Relying on what is scientifically unassailable, Spokes 8 parses reality and its indispensable construction. After relating how existence takes shape, Spokes 8 explains how to take advantage of this knowledge to live happily ever after.

From the chapter on Reality:

The reason that reality is beyond conception is found in the nature of affinity. As animals, humans identify with objects, not processes. Human object orientation overlooks the more essential aspect of existence, which is interactive ecology.

Manifestation is ultimately of interacting energies in ever-emergent processes, not objects. Entanglement may be conceptually comprehended, but its intricacy boggles the mind.

From the section on Energy:

Energy is commonly defined as the relative ability to put matter to work. From a physics viewpoint, as matter is transposable into energy, that definition is a tautology.

More formally, in physics, energy is a conserved extensive property of a physical system. Parsing that definition for content leaves a void.

From the section on Monism:

Without duality, there is no mind-body interface. The two are inseparable. Reality is a unicity.

Monism presents a dilemma that dualism lacks. Monism does not correspond with apparent perception, as both body and mind seem to be present.

This makes monism difficult to comprehend; particularly matterism, which posits that the physical world is only a proximate subjective experience, and ultimately an illusion. In contrast, materialism – that the physical is real, and that the mind is a figment created by the brain – is easier to believe.

And we readily default to the facile explanation, however specious. Explaining away what is apparently there is an almost insurmountable obstacle.

From the section on Matterism:

Matterism has no explanation for how organisms without identifiable brains could possibly behave intelligently, from viruses on up. The savvy of plants is indisputable, yet they have no physical system for it.

Most damningly, matterism utter fails to provide any account of how the mind can powerfully affect the body, down to the cellular level: a phenomenon for which there is oodles of evidence.

From the section on Eastern Essences:

The mists of time obscure beginnings. Just as the first humans cannot be identified, it cannot be known when the first ones attained realization consciousness, or even how they tried to convey it to those not enlightened. What is known is that epigrams about enlightenment have passed down from ages which now seem mythical. Two emanate from the most ancient civilizations: China and India.

The Chinese diagram symbolic of the Tao geometrically represents the interplay of two opposite principles: yin and yang. Yang is masculine, active. Yin is feminine, receptive.

Yin and yang represent the eternal generation of diversity. They are enclosed in a circle, which symbolizes the unity that is the ineffable Tao.

Yoga arose in India around the 5th century BCE. Though yogic practices have been various, including physical postures, the aim has always been quieting the mind.

From the chapter on The Mind:

The mind is an intangible organ for symbolic processing. Its functioning is grounded in whatever biological system processes sensory input into ecological comprehension.

Mentation is inherent in every life form. Every organism has a mind, even if it lacks an identifiable physical organ analogous to the brain.

From the chapter on The Soul:

In contrast to the Collective, those who are enlightened are utterly unconcerned about what follows life, as individuality has no value. To have experienced life and be done with it is sufficient.

From the section on Memories:

Individuality is cherished via memory. While alive, the agility of memory erodes with age. But memories are always adumbrations, suspect in their fidelity.

Memories are selective patterns emotively imprinted by the mind. They are always rough sketches. Their evolutionary import is for survival skill, not sentiment.

From the section on Desire:

Desires are products of the mind and fulfilled in the mind. Any associated intermediate activity is merely instrumental: whatever you do to gain the object of desire. The struggles of dealing with and satisfactions reaped from the physical world are nothing but mental gyrations.

From the chapter on Realization:

2 instincts preponderate mental life. Foremost is the biologically-based urge to satisfaction. This instinct dominates the lives of the Collective.

2nd is the desire for control. We begin our quest at birth. The fundamental means for obtaining control is comprehending the world in which we live, including our own evolving nature.

Spokes 8: The Hub of Being concludes Spokes of the Wheel.