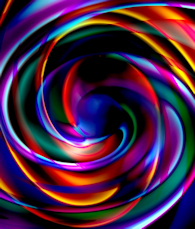 The stability of energetic structures from the quantum level on up exemplify the coherence with which existence is fabricated.

Vortices occur in a variety of physical systems, including gases, fluids, plasmas, and the electromagnetic fields that course in solids. Skyrmions are quasiparticles of magnetic vortices which behave coherently in holding their intricate arrangement. Stability results from the atoms involved being enfolded by an energy boundary.

Quasiparticles are emergent phenomena that collectively behave as if they are fundamental particles but are not considered legitimate in the sense of being an elementary fermion or boson. Quasiparticles may decay and then reorganize themselves, becoming virtually immortal. As German quantum physicist Ruben Verresen observed, “quasiparticles do decay, but new, identical particle entities emerge from the debris. This process can recur endlessly. A sustained oscillation between decay and rebirth emerges.”

Solitons are robust, self-reinforcing standing waves which were first described after being seen by civil engineer Scott Russell in 1834 in a water canal in Scotland: a wave that sustained itself for over 8 miles. Solitons form a class of topological phenomena which can only be accounted for by the pilot wave theory, which French physicist Louis de Broglie originated in 1927.

de Broglie formulated the pilot wave theory to explain the wave/particle duality that forms the core of all quantum physics theories, and which have been proven as the yin/yang quantum-level basis of existence. As a mathematical formulation, each quantum is guided by a background wave which deterministically creates the appearance of matter. The natural force of coherence provides the supposed quantum background wave as guidance.

The quantum waves which compose the fabric of existence are thoroughly entangled, with typically stronger binding locally in an unending mesh. All the information needed to continually but discretely update the fabric of existence is universally known. This is shown by the fact that the traversal of all energy waves is optimal for the media in which they travel – an axiom in all modern physics theories.