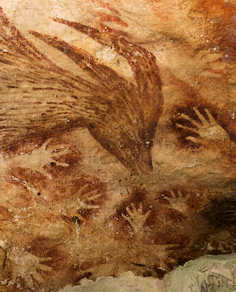 In 2017, Indonesian archaeologist and caver Pak Hamrullah discovered a bevy of artwork in a cave on the island of Sulawesi that dates to 44,000 years ago.

What was even more surprising was that some of the depicted creatures were surreal hybrids of men and other animals. “This scene may not be a depiction of an actual hunting scene but could be about animistic beliefs and the relationship between people and animals, or even a shamanic ritual,” speculated Australian archaeologist Sue O’Connor. Such mythical hybrids had been seen in other archaic artwork from around the world, including a 35,000-year-old ivory figurine of a lion-man found in the German Alps.

Neanderthals created both representational and abstract art in a variety of media. Hominid artwork dating to over 100,000 years ago has been discovered.

The ability of animals to fulsomely communicate events is known from the calls and communiqués of birds and other non-human creatures. Storytelling is as old as life itself.

Cells, whether in a multicellular organism or otherwise, live in communities which bath in communication. Electrical potentials provide beacons of cellular organization and status. Cells construct polarity to facilitate spatial orientation within, allowing parts of a cell to understand where they are in relation to others. “Cell polarity is critical for the specialized function of the vast majority of cells,” said molecular biologist Rong Li. Such careful arrangement of polarity is a story of how to organize.

To engender polarity, enzymes carefully arrange phospholipids, which are a major component of cell membranes. This alters the map of electric charges in a cell, helping shape a coherent terrain for cellular molecules to comprehend. Besides their structural role in assisting intracellular molecular orientation, phospholipids facilitate intercellular signaling. Such endeavor is an apex of representational art, in depicting instructions of how to work.

Elaborate sets of communication channels and protocols exist in all cells: to track events within, to procure supplies and avoid hazards from without, to fight invasion, to grow, divide, repair, to pick up on neighborhood news, and receiving marching orders to serve an organism’s greater good. Cellular communication is part of a gyre of information gathering and retention, frequently leading to decisions that initiate a new round of communication.

“We think of the ability for humans to make a story, a narrative scene, as one of the last steps of human cognition,” boasted archaeologist Maxime Aubert, showing her ignorance of biology. Stupidly praising humans as uniquely intelligent tarnishes the credibility of science by drawing uninformed conclusions. The weaving of fantasies is most pronounced in neurobiology, where silly men and women misconstrue the electrical jerks of neurons to be thought incarnate. At best, such daydreams are a confusion of correlation with causality.