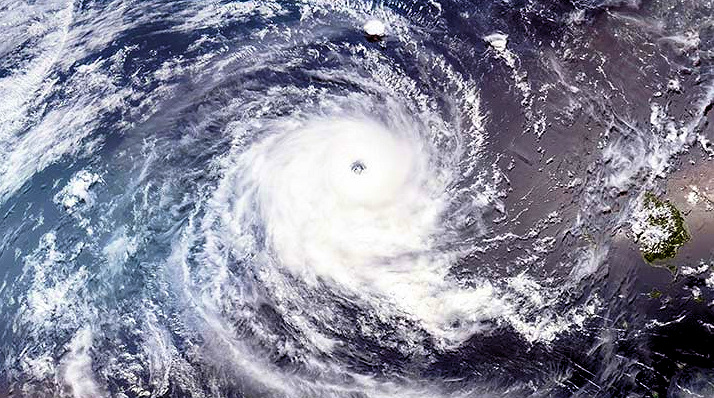 Whereas a hurricane is a cyclone in the Atlantic Ocean and northeastern Pacific Ocean, a typhoon transpires in the northwestern Pacific Ocean. In the south Pacific or Indian ocean, such storms are called tropical cyclones or cyclonic storms.

The Coriolis effect is deflection of matter from an inertial or fictitious force within a frame of reference. Though known beforehand, a mathematical expression for the Coriolis effect appeared in an 1835 paper by French mathematician, mechanical engineer, and scientist Gaspard-Gustave de Coriolis (1791-1843), who was writing about the physics of water wheels. A fictitious force is the appearance of energy acting on mass in a non-inertial frame of reference, such as rotating or accelerating motion.

Cyclones typically form over large bodies of relatively warm water. They derive their impetus from evaporation off the ocean, which rises and recondenses into clouds and cools to saturation. This energy source differs from mid-latitude cyclonic storms, such as nor’easters and European windstorms, which are fueled primarily by horizontal temperature contrasts.

The strong rotating winds of a cyclone emanate from the conservation of angular momentum imparted by the Earth’s rotation as air flows inwards toward the axis of rotation. Accordingly, cyclones rarely form within 5° of the equator. Cyclones are almost unknown in the South Atlantic due to a consistently strong wind shear and equatorial doldrums. Conversely, the African easterly jet and areas of atmospheric instability give rise to cyclones in the Atlantic Ocean and Caribbean Sea. Cyclones near Australia owe their genesis to the Asian monsoon and Tropical Warm Pool, which is the ocean water in the Eastern Indian Ocean and western Pacific Ocean that is consistently the warmest on Earth.

“These storms have become stronger on global and regional levels, which is how cyclones respond to a warming world,” says atmospheric scientist James Kossin. The exception has been the western north Pacific, as poleward migration of storms has reduced their intensity.