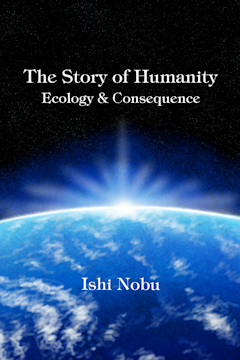 The Story of Humanity: Ecology & Consequence is the tale of humanity, from hominid emergence to their self-extinction. Watch an introductory video. Buy on Amazon (Kindle, paperback).

The Story appears to be written by alien scholars long after Earthers were gone. From its preface, The Story seems to be science fiction. It is instead history and prophesy.

The Story is a saga of misadventure from a remarkably adaptable creature. The book chronicles how and why men wiped themselves out.

The thematic core of the book is psychology. The Story highlights the junctures at which men had the wrong concept and so made the wrong move.

There are 5 chapters: A Fateful Ape, The Reign of Thought, The Evolution of Civilization, The Toll of Industry, and An Inevitable End.

“A Fateful Ape” traces the origin of hominids and outlines the traits that made them distinct from their primate predecessors. The climate of the times and ecology of these apes shaped the evolution of their bodies. Aridity influenced their becoming a graceful, gracile biped.

Hominid evolution was most strongly shaped by its sociality. Capacity for comity gifted great promise. Becoming more altricial meant opportunity for education and thereby wisdom. This essentiality was squandered in the last age, when it was most crucial.

“The Reign of Thought” explains how the mind was critical in creating the outcomes which decided humanity’s destiny. Imagination was the font of rich culture and technology. But belief led this creature astray in debilitating ways.

“The Evolution of Civilization” chronicles the major trends that shaped humanity’s fate. This wandering ape spawned a diaspora that gave it a planetary presence. The upshot was that collective folkways had global consequences.

A key component of human economics was willingness to share. Failure to do so equitably was their undoing. Giving in to greed guaranteed volatile dynamics for societies, thereby lessening quality of life for all.

“The Toll of Industry” tallies the tariff that enriched a few while wearing the world down. The mindset of materialism drove an embrace of convenience as defining progress. But the externalities of technology belied the promise of sustainable prosperity. Chasing imagined bright futures cast dark shadows.

“An Inevitable End” culminates the human experience. Plutocratic capitalism showed itself to be an unsustainable regime. When changing course became critical, democracy proved an anchor of conservative inertia.

Foreboding pollution became overwhelming. Political leaders knew that doom was impending. Yet they attempted no remedy. Cowardice at the top crumbled civilization and crafted an inevitable end.