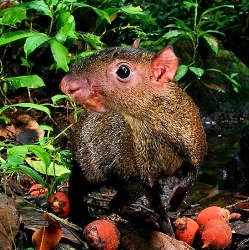 Seed dispersal is essential to many trees for population survival. Fruit is a common incentive to facilitate spreading seeds for such a species.

The Neotropics (Central & South America) are rich in woody species that bear large-seed fruit. 10,000 years ago, megafauna, such as mastodons and gomphotheres, effectively scattered seeds by defecating far from the source of their meals.

The extinction of these megafauna by human hunting carried the risk that these tree species would also go extinct. Yet several survived.

Agouti are a rodent endemic to the Neotrophics, related to guinea pigs, but more rat-like. Macaws and agoutis are the only species known that are able to open Brazil nuts without using tools; a feat that takes strength and exceptionally sharp teeth.

Like squirrels, agoutis hoard food in numerous small buried stores. Like rats, they are wily thieves, readily raiding caches that others bury.

By repeated theft and recaching, a seed may move many times. A study focused on agouti and the black palm tree, a former megafauna tree which bears large-seed orange fruit. The most-thieved seed was seen buried 36 times before an agouti dug it up and ate it.

Ishi Nobu, Spokes of the Wheel Book 3: The Elements of Evolution (coming in 2012).