Republican president, Richard Nixon, begat the Environmental Protection Agency by executive order in 1970. Since then, Republicans have increasingly forsaken all survival instincts by being against clean air and water, and for the continuing rape of Nature until self-extinction finishes humanity off. What to make of this should be clear, but dullards for democracy ignore the obvious as much as Republicans do environmental desecration.

“Preservation of our environment is not a liberal or conservative challenge; it’s common sense.” ~ US President Ronald Reagan in 1984, paying lip service

As recently as George W. Bush’s presidency, Congressional Republicans voted for environmental protections about 1/3rd of the time. That support ebbed since and has virtually vanished under Trump. Meantime, Democrats have become more environmentally diligent. 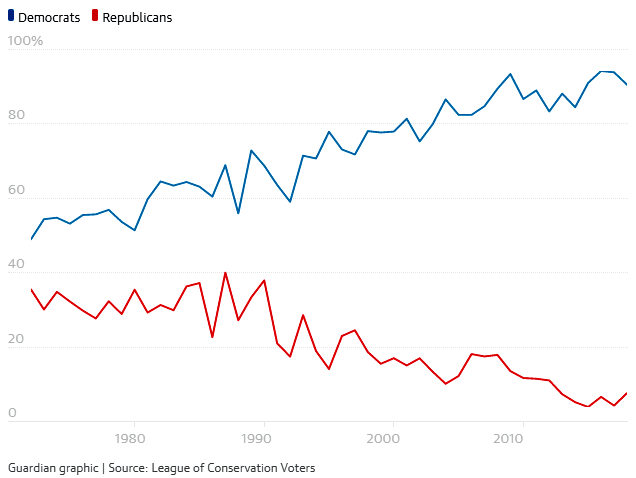 Inspired by Reagan, Republicans increasingly saw government as “the problem,” and sought to roll back regulations. “Republican leaders in the US do not merely prefer market-based solutions, they refuse even to acknowledge problems that cannot be solved by markets. Climate change is a case in point,” observed American science historian Naomi Oreskes. “The Republican party has refused to accept the severity of most environmental issues, including climate change,” said American conservationist Benji Backer.

Already American drinking water supplies are nonpotable throughout much of the country. Air pollution takes a continuing punishing health toll. Further, humanity’s own survival is imperiled by inaction on accelerating climate change. As such, Republican intransigence against protecting life cannot continue to be countenanced if the goal is to afford the continued existence of humankind. American Republicans have become a clear and present danger to the world at large.

The only reasonable political solution is to eliminate the evil influence of Republican corporate apologists. The problem is systemic, and so must the solution be.

More than enough states have called for constitutional amendments which Congress has ignored. In light of this constitutional violation, the next President should call a constitutional convention which enshrines environmental protection as a priority and substitutes the lowest-common-denominator idiocy of democracy for meritocratic governance (among other measures, including pulling out by the root the societal weed which caused the current crises: capitalism).

The luxury of ill-informed politics must be abandoned. Self-extinction is mere decades away if radical action is not taken soon.

For further discussion of this topic, see Spokes 7: The Pathos of Politics and Spokes 6: The Fruits of Civilization.