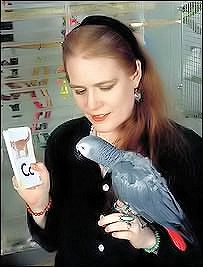 Inspired by famous parrot Alex, Aimée Morgana of Manhattan, New York, acquired a gray parrot: N’kisi. By the time he was 12 years old, N’Kisi had a vocabulary of 1,500 words. He usually spoke in sentences.

Aimée began to notice that N’kisi was a telepathic reader. The parrot would announce when Aimée was about to call someone.

One time Aimée was looking at a deck of cards with pictures. N’kisi was in another room on a different floor. Aimée paused to look at a particular card that had an image of a vibrant purple car. At that moment, from upstairs, N’kisi said: “Oh, wow, look at the pretty purple.”

Aimée opened envelopes of images while N’kisi was in another room. While she was looking at an image, N’kisi would often comment, correctly identifying the pictures 32% of the time (23 out of 71). That is quite statistically significant; far beyond random.