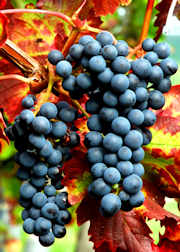 Terroir is the French term for the distinctive flavors and scents from artisanal crops such as wine, coffee, and chocolate.

Terroir took root as an attribution of wine in the Middle Ages. Cistercian and Benedictine monks in Burgundy, France, divided the local countryside into climats according to subtleties in the landscape that seemed to translate into unique wine characteristics.

Tenuous divergences in topography, soil, sunlight, humidity, temperature, adjacent plants, and even tiny biota affect how the produce of a plant smells and tastes. Aphids and mites, for instance, can influence terroir, as do microbes when they munch on the food en masse, producing distinctive metabolites.

The distinctions are had in the ratio signatures of trace elements including boron, calcium, cesium, manganese, magnesium, and potassium. These individual elements are folded into compounds, such as caffeine, which grant terroir distinction by virtue of the subtle sensations they impart when consumed.

80% of taste is smell. Terroir is as much about aroma as what the taste buds deliver.

Plants produce chemical compounds known as aroma glycosides, which are specific sugar coupled to a volatile aromatic molecules. Intact aroma glycosides have no scent. But break the sugar-volatile bond – via heat, acidity, or enzymatically – and the aromatic volatile is set free. The bouquet of an aged bottle of wine significantly owes to volatiles in the grapes that yeast enzymes let loose during fermentation.

Brewers avert beer creep by adding hops (the flower of the hop plant) to beer early in the brewing cycle. Heat breaks the sugar-volatile bond and the aroma from aroma glycosides is largely lost before bottling. The flavor tends to be consistent.

Craft brewers make “dry hopped” beers by adding the hops after the boiling stage. This late addition leaves many aroma glycosides, which then go into the bottle intact. Volatile aromatics are released as yeast enzymes break bonds – even after the beer has been bottled. Whence the terroir of these beers are likely to creep.

The significance of yeast in wine fermentation has been appreciated for over 2 centuries. But yeast is not the only tiny terroir character. Soil microbial communities, including fungi as well as bacteria, vary geographically. Their localized metabolites comprise an element of terroir. The decided presence of Penicillium fungi, for example, craft a wine low in octanoic acid: a volatile that can give wine a mushroom flavor.

Terroir illustrates how the richness of our food owes to the beneficence of Nature, including participation by what are commonly disparaged as “germs.”

Carolyn Beans, “How does a crop’s environment shape a food’s smell and taste?,” Science News (10 September 2020).