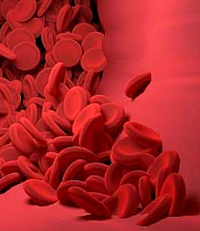 The cells comprising the thin inner layer of blood vessels regulate flow and blood’s many other behaviors. This endothelium accomplishes its responsibility by sharing copious information in a self-organizing network.

“The cells in the endothelium are not uniform but specialized to particular types of function. There is a well-organized, rapid, and robust communication system that shares information so that coordinated responses occur,” observes hematologist John McCarron.

The cardiovascular system provides the needed oxygen supply to the body’s vast world of cells. Blood also acts as cellular garbage system and defender of integrity via an immune system.

A robust blood system is essential to survival. There are a host of cardiovascular diseases which may occur if effective communication breaks down.

Calcium ions (Ca2+) are favored as biomolecular correlates for data packets. The circulatory, intelligence (glia/nerve), and digestive systems all use Ca2+ as a messaging medium. This owes to calcium’s light weight, easy electron configurability, and its abundance in Nature.

The mind projects a physical world. This primordial deceit is seen through by meticulously perceiving the details by which energetic mechanics transpire, such as with endothelium.

As with other body systems, there is no possible physiological explanation how the endothelium works in the coordinated way that it does. The blood network illustrates that physicality is mere perceived artifact in the data-rich exhibition of Nature.

The larger point is that scientists who insist that physicality is reality are just duped fools: simpleminded religious fanatics who carelessly conflate matter with motion and remain studiously ignorant of the simple truth that energy is nothing more than an idea – the most basic lesson of modern physics.

“Study reveals how blood vessels use ‘short cuts’ to control the cardiovascular system,” Medical Xpress (4 May 2022).