Concern about self-extinction via industrial pollution and the rape of Nature has been eased by falsities. Humanity is being doomed by bad data and irresponsible reportage.

The United Nations collates pollution estimates from nations around the world. That data becomes the basis for climate models’ projections of global warming to come.

An examination by The Washington Post of 196 national emissions reports revealed a giant gap between what countries declare their emissions to be versus the greenhouse gases they are actually sending into the atmosphere. The Post: “The plan to save the world from the worst of climate change is built on data. But the data the world is relying on is inaccurate.”

The gap between actual and reported emissions is estimated to be 15-23%: as big as what either the United States or China – the world’s largest polluters – annually spew out. The Post: “The gap comprises vast amounts of missing emissions. It is the result of questionably drawn rules, incomplete reporting in some countries, and apparently willful mistakes in others – and the fact that in some cases, humanity’s full impacts on the planet are not even required to be reported.”

At least 59% of the gap stems from assumptions about how land behaves regarding emissions. Land can draw in carbon as plants grow and soils store it away. Or that stored potential warmth can go back into the atmosphere as forests are logged or burnt, or as peat-rich bogs are drained and start to emit greenhouse gases.

Countries fudge their emissions figures to make themselves look good. Malaysia, for example, released at least 422 million tons of greenhouse gases in 2016, placing it among the world’s top 25 emitters that year. But because Malaysia claims its trees are consuming vast amounts of CO2, its reported emissions to the United Nations are just 81 million tons, less than those of Belgium, a small European nation.

Armed forces are among the biggest polluters on the planet, contributing an estimated 6% of warming emissions and prolific pollution otherwise. But military environmental fouling avoids scrutiny because nations do not include military emissions in their reporting. Thanks to the political power of the most militaristic nation – the US – the UN does not require armed forces’ pollution to be tallied. “Many nations don’t specifically report any military carbon data. Those that do often report partial figures,” notes environmentalist Stuart Parkinson.

Methane (CH4) is a potent greenhouse gas, with 86 times the warming power of carbon dioxide (CO2) for 2 decades. As it ages, methane oxidizes and loses hotness – but is still 26 times more warming than carbon dioxide for a century.

Methane emissions have contributed almost 1/4th of the cumulative warming from greenhouse gases since 1750. Although methane is far less abundant in the atmosphere than CO2, it absorbs thermal infrared radiation much more efficiently.

The Post: “Scientific research indicates that countries are undercounting methane of all kinds: in the oil and gas sector, where it leaks from pipelines and other sources; in agriculture, where it wafts upward from the burps and waste of cows and other ruminant animals; and in human waste, where landfills are a major source.” Methane emissions are underreported by an estimated 20%.

A new generation of satellites that can measure greenhouse gases are now orbiting Earth. They can detect massive emissions leaks. What these satellites have shown is that Russia, the world’s top methane emitter, blatantly understates its emissions. Many oil and gas producers in the Persian Gulf, such as the United Arab Emirates and Qatar, also report miniscule levels of methane emissions that don’t line up with other scientific data sets. 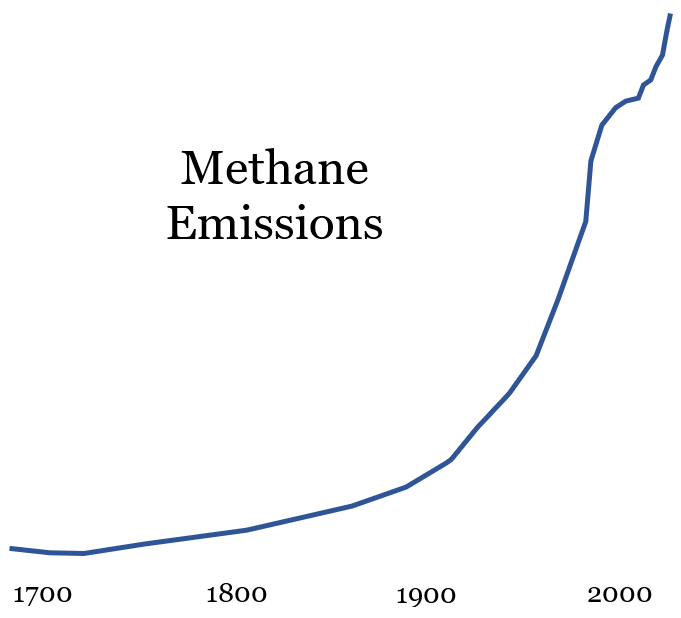 Meanwhile, fluorinated gases, which are exclusively man-made, also are significantly ignored. Known as “F-gases,” they are used in air conditioning, refrigeration, and the electricity industry. Dozens of nations don’t report these emissions at all: a major shortcoming since some of these potent greenhouse gases are a growing slice of warming emissions.

The ones that do report F-gases don’t tell what they know. Vietnam, for example, reported in 2016 F-gas emissions 99.8% lower than what they likely were. Vietnamese officials said more recent reports assume fluorinated gases do not escape from air conditioning and refrigeration systems. But they do. US supermarkets lose an average of 25% of their fluorinated refrigerants each year.

Part of the gap in emissions statistics stem from the UN reporting system. Developed countries have one set of standards, while developing countries have another, with wide latitude to decide how and what and when they report.

The largest polluters, including China and US, report their emissions from over 2 to 20 years late. 45 countries have not reported any new greenhouse gas numbers since 2009. A glance at the graphs of rising emissions shows that tardy reporting is gross understatement.

National pledges to reduce emissions are based on their own fake numbers. “It’s already hard to make sense of the pledges,” remarked French emissions analyst Phillipe Ciais. “If the baseline is underreported, the percentage of emission reductions that you get will be flawed.”

Just as public awareness of global warming has been swelling, so too the implicit pressure on governments to lie about their emissions. It is a safe assumption that, along with burgeoning emissions, so too a growing gap between actual emissions and their diminished reporting. The significance of this comes into context by considering the time lag between these released pollutants and their atmospheric warming effect.

There is an approximate 4-decade lag between emissions and atmospheric hotting up. This owes to oceans absorbing ~95% of the initial warmth from greenhouse gas emissions. Essentially, the global atmospheric temperature now owes to cumulative emissions only to the 1980s. 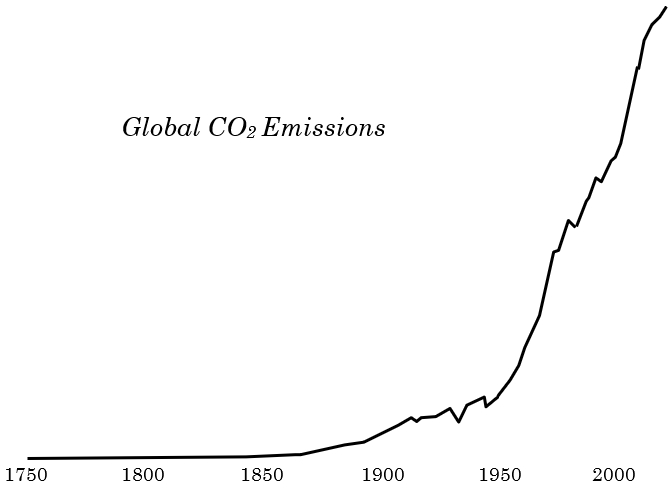 Look at the exponential curves of emissions graphs, which are based on reported data. Now consider that those graphs increasingly understate actual emissions. That figure was at least 25% in 2021. (Remember, the Post analysis was based on 2016 data, and the situation has only gotten worse.) Finally, add in the 4-decade lag between emissions and atmospheric warming. A nasty train of thought indeed.

The projections that climate models produce are based upon the jigged, understated data, and have a biased conservatism against being alarmist. Work on the models is, after all, government funded.

Most telling is underestimating “climate sensitivity”: how much of a bump in warming results from incremental increases in greenhouse gas emissions. The bottom line of what that means are that the models are predicting relative mildness instead of the ravaging wildness coming soon.

The last-reported major climate model best conforming to understated data is called RCP8.5. This projection runs hot: predicting a median rise of 4.5 °C by 2100. Such a rate of warming would be terminal to human civilization well before then.

It gets worse. Even RCP8.5 understates climate sensitivity.

The hoax of the climate crisis is not there isn’t one, but that it’s so much worse than reported, especially by corporate media, the public’s dominant source of scientific hand-waving. The media use a variety of techniques to report climate catastrophes without effectively relating their impact. The general gist is to dilute bad news by omission and distraction: misinformation craftily posed as information.

For instance, wildfires are seldom reported with a map showing their extent. Such maps would put an exclamation point behind how widespread the lasting damage is.

“Hard news,” as it used to be called, is a thing of the past. Look at any newspaper and 89% of it is trivia. The bad news is mostly political bickering. (That 89% “trivia” figure really represents, of course, a rough estimate. By putting out an odd number, it gives an undeserved appearance of accuracy. That is just one of many sly techniques savvy propagandists employ – one that you see all the time.)

Mass media nowadays treats all of its reportage as human-interest stories. Most of the Post article on underreported climate data was human-interest minutia. That helped take the reader’s mind off the climate impact and instead focus more on how outrageous the emissions reporting deception is.

Piteous stories of people are one thing. Folks just don’t want to read news that seriously bums them out with the big picture, backed by undeniable facts. Corporate mass media don’t report how impending self-extinction is – because that’s the ultimate bummer.