Throughout history, maxims of wisdom emanate from the spiritually realized. Yet 99.9+% of the world (the Collective) fail to apply these lessons, preferring to suffer in ignorance.

(This post is a rough sketch of some content which is more fully (and gently) explained in the short book The Red Pill: Mastering the Matrix.)

A guru is a competent teacher who is realized. There have been a few famous realized men who were lousy teachers, and, hence, ‘false’ gurus. Being realized does not make one a good teacher.

With exceptions, the world’s religions began with the teachings of gurus. These teachings were then popularized by ignorant enthusiasts. Insights ossified into dogmatic religions.

(Judaism and Christianity are exceptions to religions from gurus. Judaism began as a cultural creed which became a monotheistic religion as an instrument for social cohesion: for Jews to continue tribal identification despite oppression from other tribes. An offshoot of Judaism, Christianity became a religion based upon hero worship of the false guru Jesus of Nazareth.)

Ignorance is both spiritual and factual. This entanglement owes to the nature of ignorance.

Ignorance is foremost slavery to the mind. As even ignorant people acknowledge, the mind regularly deceives. Yet ignoramuses continue to believe what their mind tells them. By believing the falsities of the mind, spiritual ignorance begets factual ignorance.

Science has amply proven the idea that physicality is a false perception perpetuated by the mind. Ignorant ‘scientists’ insist on facetious sciences, based upon the precept that physicality is real – which ignorant folk readily believe. Hence, conventional science is a religion.

Similarly, there are (as a historical continuum) an abundance of spiritual fakirs: those who are not realized but act as spiritual teachers nonetheless. Clinical psychologists are fakirs who confuse feeling better with being better.

For instance, fakirs espouse esteem of emotions, especially love. Love is just adoration of a concept. Any guru who espouses love as a central tenet is false – or, at best, condescending.

To gain adherents, some regularly condescend. There just is no other way to appeal to ignorant folk than dangle bait that they can comprehend. But condescension as a practice is a futile stratagem. You can’t clue the clueless. Though condescension is unavoidable (a guru is always talking down), decent gurus do so sparingly.

A very few are either born realized or attain enlightenment without effort. For everyone else, going from ignorance to realization takes resolute will.

Enlightening oneself is conceptually simple: subdue the mind into an abiding quietude. The practice is anything but easy.

The mind resists its subjection. Hence, seeking realization is a concerted effort for which guru guidance can be instrumental.

Most ignorant individuals don’t seek to enlighten themselves. Those that do – spiritual seekers – are a distinct breed. The distinction is that they possess the drive to rid themselves of their ignorance. That drive comes from being fed up with suffering ignorance. If they can find the right guru, they are likely to succeed.

As the chart below shows, the distinction between ignorance and realization is not a gradation. Instead, the inner landscape is like night and day. 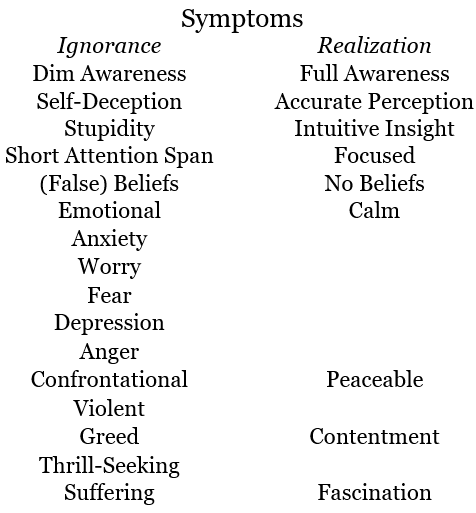 If you knew someone that you told a way to solve their problems – but they ignored you – what would you think of them? That’s what gurus think of the ignorant Collective, albeit with compassion.