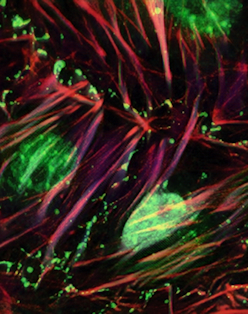 Life on Earth emerged many times. Cells of several sorts arose, their chemistry and structures confined to certain parameters of potentiality. The possibilities were delimited by efficiencies and data facility. Indeed, information has always been the defining feature of life, as has been sharing.

The vital energy of consciousness imbues every molecule and cell, as all life needs to be aware of its environment. A localized, energetic ordering principle of coherence sustains life and provides for its very existence. Evolution is opportunistic adaptation based upon intelligence in all senses of the word.

American biologist Carrie Arnold: “For cells, communication is a matter of life and death. The ability to tell other members of your species – or other parts of the body – that food supplies are running low or that an invading pathogen is near can be the difference between survival and extinction. Cells secrete chemicals into their surroundings, releasing free-floating messages for all to read.”

Viruses evolved by shedding inessentials and adopting a parasitic lifestyle. Even now, roughly half of all species are parasites. That is only the start of the tally of dependency.

All heterotrophs are essentially parasitic in needing to consume other life in order to stay alive. By that definition, only a modest minority of life – autotrophs – are truly free-living. Plants and their ancestors have been the dietary foundation of complex life on Earth. “Plants play a vital role in the flow of energy through all ecological cycles. The whole system of life rests solidly on their industry, without which the evolution of many other organisms could not have occurred,” note English biologists Martin Ingrouille & Bill Eddie.

The descent of viruses was an intelligence operation. Viruses learned what they did not need, and how to access what they would need, from others. This was accomplished by sussing information from packets – vesicles – that cells excreted. “Since vesicles resemble viruses, the question is whether the first extracellular vesicles were primitive viruses and the viruses learned from extracellular vesicles or vice versa,” ponders Russian virologist Leonid Margolis.

Early on, single cells learned that cooperation paid dividends. Biofilms are metropolitan communities which can harvest food and defend themselves with a dexterity that individuals could never attain. This triumph owes to communication.

Likewise, the evolution of multicellular life entirely depended upon communication skills, both within and among cells. The human body can only digest the simplest sugars and broken-down mineral molecules. The microbes in our guts tell us what they want to eat (and vice versa), do our digestion for us, and ladle our cells food which they can consume. We share every meal we have with our best friends.

Carrie Arnold, “Cells talk in a language that looks like viruses,” Quanta Magazine (2 May 2018).