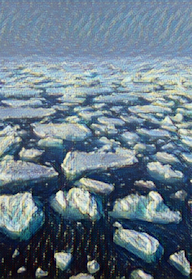 The Arctic is warming at over twice the average rate of the rest of the planet – a phenomenon known as Arctic amplification – and thereby shedding sea ice at a staggering pace. Ozone-depleting gases not fully tallied in current climate model forecasts have contributed significantly.

Ozone-depleting substances, including chlorofluorocarbons (CFCs), are known to heat the atmosphere more efficiently than CO2. But most research on CFCs focused on their effects on the ozone layer.

A team of researchers compared climate simulations both with and without the mass emission of CFCs that began in the 1950s. Without CFCs, the simulations showed Arctic warming of 0.82 °C, but with CFCs, the number jumped to 1.59 °C.

Climatologist Lorenzo Polvani: “The rapid warming of the Arctic, perhaps the most striking evidence of climate change, is believed to have arisen from increases in atmospheric concentrations of greenhouse gases (GHGs) since the Industrial Revolution. While the dominant role of carbon dioxide is undisputed, another important set of anthropogenic GHGs was also being emitted over the 2nd half of the 20th century: ozone-depleting substances (ODS). These compounds, in addition to causing the ozone hole over Antarctica, have long been recognized as powerful GHGs. 1955–2005, atmospheric concentrations of ODS increased rapidly. The large impact of ODS on the Arctic occurs primarily via direct radiative warming, not via ozone depletion. There has been a substantial contribution of ODS to recent Arctic warming.”

A salient point is the time lag between greenhouse gas emissions and atmospheric effect. It may be 20–40 years or more before emitted pollutants have a pronounced surface effect. Considering the massively increased volume of GHGs let loose this century, global warming is likely to rocket in the next few decades.