The oceans have absorbed ~90% of the warming from man-made pollution. Several trend changes in ocean currents have resulted. Among them is that the Gulf Stream is slowing. The mainstream media has reported this slowdown as a source of impending calamity in weather events, including warmer southern American winters and colder European winters. There is no such consensus among climatologists. 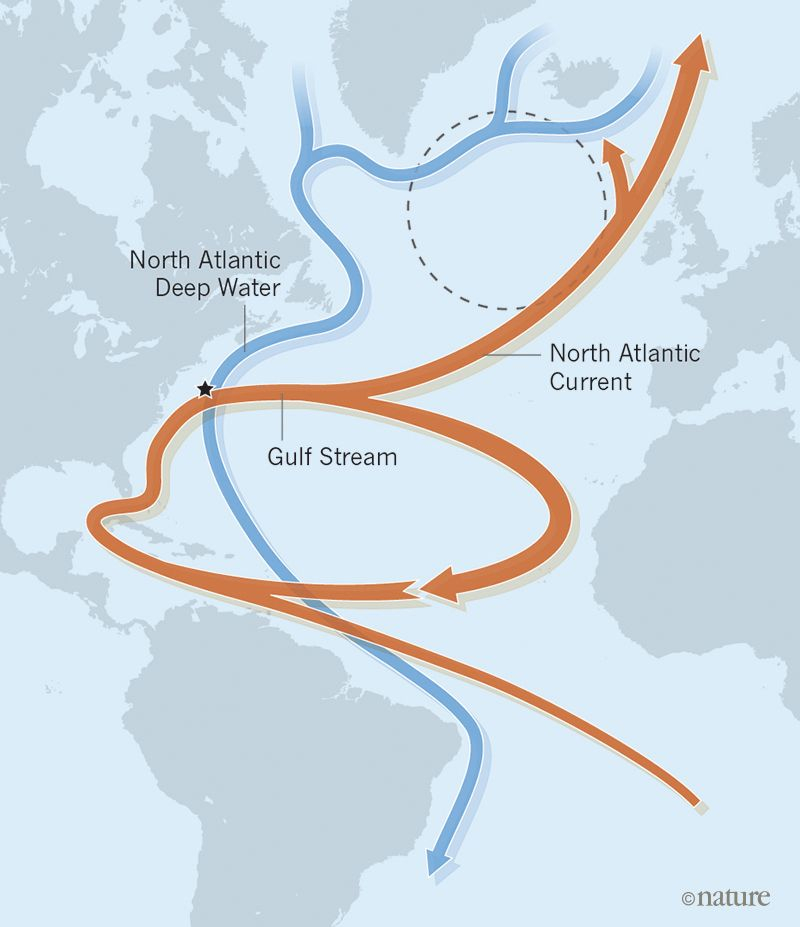 Whether the Gulf Stream is even weakening remains a subject of debate. Reporting on research published in Nature magazine in April 2018, American climatologist Summer Praetorius wrote, “the varying strength of [the AMOC] system is thought to have major impacts on the global climate, and has been implicated widely in some of the most remarkable and abrupt climate changes of the past. Direct measurements of the modern AMOC flow rates show a decline in its strength in the past decade. Data analysis shows this pattern emerged in the mid-20th century.” Comparing modeling results with measurement data led to the an “estimate that the AMOC has declined by about 15% in the past half-century.”

German climatologist Levke Caesar was one of the authors of one of 2 studies that Praetorius reported on. Both studies converged on a 15% slowdown using distinct measurements. Caesar said, “We see a cooling southeast of Greenland, although everywhere else on the globe you see a warming. When the [AMOC] circulation slows down, we have less heat transport to that region.”

A year later, in 2019, American climatologist Ben Kirtman retorted. “Detecting the climate-change signal on top of the natural variability has really been a challenge. There are articles saying it’s not weakening, articles saying it’s weakening. There’s a lot of debate about it. I think the scientific consensus is that the jury’s still out.”

Climatologist Alexander Robinson noted that “we are only beginning to understand the consequences of this unprecedented process – but they might be disruptive. It is true that in the past this weakening of AMOC happened very rapidly and caused big changes.”

Steve Connor wrote a 2015 article for the British newspaper The Independent with a typical byline: “Gulf Stream is slowing down faster than ever, scientists say. Gulf Stream stops Britain from freezing over in winter.”

Writing in 2006, American climatologist Richard Seager: “Whether the scientists’ statements are measured or inflammatory, the British media invariably warns that this will plunge Britain and Europe into a new ice age.

“The panic is based on a long-held belief that the northward heat transport by the Gulf Stream is the reason why western Europe enjoys a mild climate. This idea was actually originated by an American military man, Matthew Fontaine Maury, in the mid-19th century and has stuck since despite the absence of proof.

“We now know this is a myth, the climatological equivalent of an urban legend.  Ocean heat transport plays a limited role in determining regional climates around the Atlantic Ocean. It is the atmosphere, not the ocean, that does the lion’s share of the work ameliorating winter climates in the extratropics.

“A slowdown of the Gulf Stream would introduce a modest cooling tendency. This would leave the temperature contrast across the Atlantic unchanged and not plunge Europe back into the ice age or anything like it. The cooling tendency would probably be overwhelmed by the direct radiatively-driven warming by rising greenhouse gases.”

That the world is heading into hothouse from manmade pollution is obvious. Any local good news associated with climate change is likely to be offset by bad news elsewhere, albeit not from the same specific dynamics. The pace at which good news turns bad, that bad news become legendary tragedy, and when our imminent demise unmistakably shows itself on the horizon are, for now, speculative; as is whether any concerted response now will make any difference in outcomes. That withstanding, the trend toward self-extinction is clear.

Humanity is about to find out whether it fooled itself in thinking itself intelligent. The telling metric of intelligence is not in creative technologies, not in how good times are enjoyed, but in how adversity is managed.

David Fleshler, “The Gulf Stream is slowing down. That could mean rising seas and a hotter Florida,” Sun Sentinel (2 August 2019).

Steve Connor, “Gulf Stream is slowing down faster than ever, scientists say,” The Independent (23 March 2015).