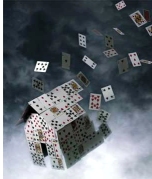 The Wall Street Journal reveals its ignorance of history in remarking that “global troubles have revealed how closely nations and financial markets have become intertwined.” Sovereigns have long relied upon bankers to finance debts. Bankers expect favors in return. Plutocracy is a hallowed tradition, ultimately based upon fostering an illusion of prosperity.

By rapid turnover in political office, with no accountability, democracy fosters government debt. Politicians must curry favor with their citizenry. What better way than fiscal lollipops that rot the teeth of rectitude.

In the process, priming the populace with lucre stirs the animal spirits to excess. Lovers of leverage, banks legally print money by lending many times more than their assets. Investors reel with the feel of a bon ton roulet.

Invariably, the roller coaster of financial folly jitters when confidence wanes. Financial crises are periodic crises of confidence: that the illusion of prosperity cannot be perpetually sustained.

The housing crisis of 2008 was a bubble pop of unrealistic asset prices; an epidemic inflation fostered by government laxity, with the financial sector happily playing along. It was but one in a long line of bank panics. Practically all the major recessions, and the Great Depression, were initiated by financial crises of confidence.

The cycle resets when a consensual sense of reality sets in, at least for a time. The markets that reflect commerce of substance drop in the wake of the sputtering financial engine that drives the illusion of prosperity.

The root illusion is that money can be made with money. To inflate the money supply without an increase in tangible assets necessarily creates an inflationary bubble that must pop.

No one protests the illusion while it lasts, even as Cassandras warn of what’s coming toward the invariable end of a cycle. Outcry accompanies the pop: investors facing a mauling by the bear market, and workers facing a system that provides no livelihood security. Workers are given a pasting while investors are assuaged.

When the ferris wheel of finance slows, the cycle spins back up: government must again prime the engine, giving more money to the financial sector that services government debt. Governments see no other choice. Hence the bailouts to banks while the unemployed go hungry and homeless.

The carnival ride of fiscal imprudence breaks down by lack of confidence in management of sovereign debt. Governments then put on an act of probity, by paying lip service to fiscal rectitude. This reeks of irony: supposedly seeing the error in fueling the engine that preserves the illusion of prosperity. Government can do nothing of the sort. Plutocracy is ultimately a crooked game of economic dissolution, but it is the only game in town.

There is growing realization that prosperity by mortgaging the future has inherent limits. The real economy has never been as robust as the politicians touted, or, in self-delusion, financial analysts projected. Governments that live by perpetually growing debt have never been sound in any sense.

The outcome is that everyday workers will pay for the sins of the moneyed. Governments see no other choice but to try to preserve the plutocracy that creates the illusion of prosperity. Government is not the will of the people, but the will of moneyed people.

The resolution of the current euro crisis is uncertain, though it will fall one of two ways: the breakup of the euro, or a patch job via euro bonds. Such patching seeks to foster the illusion of prosperity one more time. A breakup is much more fraught with immediate trepidation to what the future holds.

Hence one more turn of the wheel seems much easier. Deals will be cut. Understandings will be made. Nods and winks to get back to business as usual.

The turmoil will subside for a while. In the wake of renewing the illusion, the lives of working men and women will be diminished and lost to feed the machinery that feeds the illusion. Investors take a haircut while the lives of labor are mowed down.

The plutocracy must be preserved, or civilization as we know it will come to an end. The real economy’s back will be broken when the illusion’s spell is broken. This is the world that democracy and capitalism begat.

This folly is unsustainable. The larceny of the future has grown too large; the debt too massive. The false economy will inevitably grind down, leading to different violence than that which sustains it (the ongoing rape of the working class, via rent-taking by government and financial institutions (taxes and debt interest). Long live plutocracy.