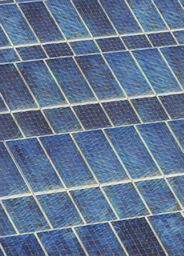 Photovoltaics are commonly touted as “clean” energy. Solar panels are instead intensively polluting.

“It takes a lot of energy to extract and process solar-grade silicon.” ~ American chemist Seth Darling

French physicist Edmond Becquerel discovered the photovoltaic effect in 1839. Becquerel’s discovery was a mere curiosity, as his selenium cells could only convert 1% of sunlight to electric power.

That changed in 1954, when Bell Labs physicists developed silicon-based solar cells that worked at 6%. Suddenly, photovoltaics fell within the realm of semiconductor technology development.

Solar cells are put together into panels for deployment. An electrical inverter is employed to convert photovoltaic output into usable electricity. Batteries store derived electricity prior to its distribution.

Producing solar panels is an egregious exercise in pollution, and the environmental destruction does not come cheap. The silicon material used in solar cells is the same as for semiconductors, but far more is required for photovoltaics.

Producing silicon wafers is energy intensive and produces mostly waste. 80% of the initial high-grade silicon is lost in the process.

Sawing silicon wafers releases dangerous dust as well as dispensing sodium hydroxide and potassium hydroxide. 50% of the material is lost in the air and water used to rinse wafers. All told, 90% of the silicon used to make solar cells is wasted.

Thin-film photovoltaic cells have a number of more toxic materials than those used in traditional silicon cells. Among the additional pollutants are gallium arsenide, copper-indium-gallium-diselenide, and cadmium-telluride.

All of the plentiful toxic waste generated in photovoltaic production extensively pollutes soil and groundwater. There have been no studies measuring the extent of the pollution toll that solar panel fabrication entails. What is known is that manufacture of photovoltaics is intensively polluting.

The photovoltaics industry is the leading emitter of these gases. Since photovoltaic production has ramped up in the 21st century, atmospheric concentrations of these gases have been rising at an alarming pace, except that no one seems alarmed.

Considering the potency of the specific greenhouse gases generated in photovoltaic production, solar panels are doubtlessly the most intensive source of greenhouse gas pollution among all energy production technologies per energy output.

Solar panel proponents tout photovoltaic efficiencies (~20%) that can only be achieved under ideal laboratory conditions. Those are the only numbers you will ever read. In the field, solar panels produce less than half that percentage on their best days.

The first common cut in efficiency comes with placement: panels not aligned with Sun greatly reduces performance. This is ubiquitous in rooftop placements.

Atmospheric humidity and haze disperse the Sun’s rays, and so cut photovoltaic productivity. Dust downs efficiencies even more; often by 20% or more.

Even modest blotches, such as from bird droppings or leaves, can cut solar cell outputs dramatically. Due to wiring characteristics, small obstructions disproportionately drop solar panel productivity. Small soiling losses can rob as much 80% from potential output.

Everyone in the solar industry knows that photovoltaic systems are expensive. That is why this solar technology had scant application before governments stepped in and granted heavy subsidies; misguided into considering this a clean energy technology.

Silicon represents only 20% of the cost of solar panel fabrication. Copper, aluminum, glass, and plastics comprise the bulk of the costs. None of the components are obtained without considerable pollution.

Rooftop solar panels incur no incremental land use. As aforementioned, such panels are typically the least efficient.

Getting optimal electricity production from photovoltaics requires extensive and exclusive use of real estate: 4 hectares (10 acres) per megawatt of power is needed. This land must be taken from fields and forests, and thereby destroy the life that lives there. From a land use perspective, photovoltaic power is 2nd only to dams, which obscenely swallow land and decimate local ecosystems.

Manufacture and installation are only the beginning of the expense for photovoltaics. Repair and maintenance costs of solar panel systems remain stubbornly high.

At the end of a solar panel’s life – 25 years at best – the embedded chemicals in solar panels can either leach into groundwater, if dumped, or released into the air if incinerated. As there is almost no recycling of solar panels, the rare and precious metals that go into them are wasted. The batteries used to store photovoltaic electricity provide an additional waste which is not recyclable.

Photovoltaics would never have achieved commercial production had it not been for ill-gotten government subsidies. The myth of photovoltaics as a decent energy source exemplifies the problem of governments responsive to uninformed public whim, and that such government officials are themselves irresponsible in serving society’s interests. The promotion of solar cells illustrates the cost of ignorance even with good intentions.