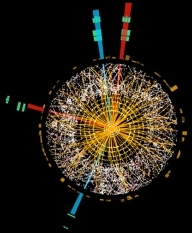 The Higgs boson was predicted in 1964 by a group of theoretical physicists, as a way to explain how mass could arise for gauge bosons. One, the zippy photon, carrier of light, was massless. The nascent Standard Model predicted the same for other gauge bosons: the W & Z particles. But these bosons were found to be bulky. The Standard Model was wrong. So an awkward mathematical patch was applied: spontaneous symmetry breaking. This necessitated another boson, one that gave the W & Z their mass. Hence the Rigged Boson.

On July 4, 2012, based upon decay patterns of a certain variety that originated at 0.125 TeV, a new subatomic boson was declared by experimental physicists, to a worldwide rapturous response. The namesake for the particle, field, and mechanism went to British theoretical physicist Peter Higgs (1929 – ).

The Standard Model (SM) had no prediction of where the Higgs would show up. Leon M. Lederman, who wrote The God Particle: If the Universe Is the Answer, What is the Question?, complained of the Higgs as “so elusive.” “The publisher wouldn’t let us call it the Goddamn Particle, though that might be a more appropriate title, given its villainous nature and the expense it is causing.”

The Economist noted: “no one knew how much the Higgs would weigh.” Not true. A competing theory, supersymmetry, was on the money in finding a Higgs at 0.125 TeV.

The Guardian declared: “The Higgs particle is the first truly new particle that mankind has conceived – and now discovered – for millennia.” Utter fabrication.

Earth, wind, fire and water were long thought the basic elements. The concept of atomism dates to the 6th century BCE, though atomic theory did not develop until the 1660s. Atoms were considered the smallest possible division of matter until 1897.

Once the water broke on subatomic particles, so many were found that Austrian theoretical physicist Wolfgang Pauli (1900 – 1958) lamented: “Had I foreseen this, I would have gone into botany.”

Human discovery of physics has been a slow fall into a rabbit hole of surprises as to the basic bits of matter and energy. The Standard Model was finally cobbled together in the 1970s.

“They have discovered the long-sought Higgs boson – the last missing bit in their standard model,” proclaimed Science magazine. Another falsity.

Physicists have long acknowledged that SM’s accounting of fields that take a particulate appearance remains incomplete. Quite a few known fields/particles are not incorporated; gravity being the most glaring exception.

The decay patterns upon which the Higgs was declared have left it an open question as to what exactly was found. Nature magazine: “The way in which the new particle decays into other particles will also be key to verifying its precise nature. Already, the new boson seems to be decaying slightly more often into pairs of gamma rays than was predicted by theories, says Bill Murray, a physicist on ATLAS, the other experiment involved in making the discovery.”

There were other surprises out of the colliders that smashed the bits leading to the Higgs. Some of the particles created by proton collisions synchronized their flight paths, “like flocks of birds,” indicating interconnections that can only be explained extra-dimensionally. But explanation from physicists for this has yet to be made.

For more, read Spokes of the Wheel Book 1: The Science of Existence.

Themis Bowcock, “The Higgs boson discovery is another giant leap for humankind,” The Guardian (July 4, 2012).