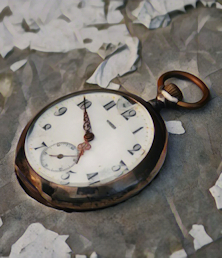 One of the most telling indicators of future success seen in young children is impulse control. Sense of time defines the quality of our lives.

Social norms may also converge to certain time horizons. Indeed, the success of societies depends upon willingness to take a long view.

From this perspective, the prognosis for the United States is decidedly dim. Sociologists have long noted the American tendency toward short-termism. In recent decades, this proclivity has gotten worse.

Politically, democracy with a strong presidency of limited terms and legislative members on short-term leashes incites crowd-pleasing gestures which cost American society down the road. Soaring budget deficits for no economic reason are the most blatant example of this.

Other, indirect stances reward politicians by bankrolling their campaigns via wealthy contributors. Failure to protect the environment or provide decent health care are kleptocratic measures designed to promote profit for manufacturers and the huge service sector which relies upon sickness for steady income. The Republican party appears beholden to this stratagem of short-sightedness.

Though unwelcome as an outsider, President Trump triumphed by toadying to tribal instincts. Since his ascension, Trump has captured the fealty of Republican party chieftains with a societally destructive short-termism unparalleled since the Civil War.

As a modus operandi, American capitalism has descended to a decided lack of impulse control. CEOs feel pressed to deliver immediate returns to shareholders, who, ironically, are well off and would be better served by a more tempered perspective. But the dynamic of the money marketplace favors focus on a quick rake.

In 1950, a share of stock in an American corporation was held for an average of 8 years. Since 2006, stocks don’t sit for a year before being traded away for something that looks shinier.

The result of pressure for profit now has been an endless parade of scandals. Wells Fargo was especially egregious in swindling its clients by creating fraudulent accounts, but all major American banks were found cheating in the wake of the mortgage crunch of 2008. Long respected health product provider Johnson & Johnson turned into a rabid drug dealer of opioids to crank cash.

Most recently, Boeing designed its latest plane to fly into the ground. Only the most hardened cynic interpreted that as a tactic to improve turnover purchases. Instead, Boeing insensibly cut costs in production and testing of its aircraft.

Corporate executives readily admit they are out for the quick buck. In a 2006 survey, 78% confessed willingness to trade the long-term economic value of their company for a short-term lift in share price.

Sitting in the CEO seat has turned into a career gamble on shareholder whim. The median tenure of an American corporate chief executive fell to a historic low of 5 years in 2018.

The climate crisis which has been simmering in plain sight since the early 1940s is finally inciting public outcry. The pollution problem leading to self-extinction is systemic. The only possible remedy that might assure survival of the human race requires a long-term view – a revolution in way products are produced and societies are organized. Instead, true to the times, proffered ‘solutions’ have been limited to short-term gestures of no promise, such as tradeable pollution permits, planting trees, and environmentally destructive energy production deceptively sold as “clean.” Humanity is extinguishing itself for lack of self-control.