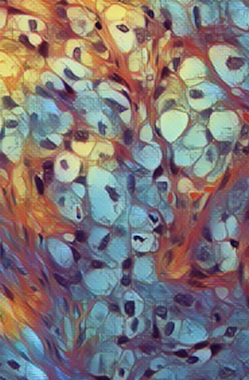 Animal tissues are cities of cells. Each tissue cell is a worker with responsibilities. There is also the communal responsibility of making sure that the city is functioning well.

To ensure abiding tissue integrity, cells enforce a quality control regime. Nonperforming cells which don’t commit suicide on their own are either eliminated or put to work in less critical places. “Cellular murders can support the survival of particular cells in a population that benefit from the metabolic banquet derived from ingesting and degrading whole cells,” observes American cytologist Michael Overholtzer.

Inefficient cells which can still serve a tissue may not be put to death. Instead, they take a job transfer. American cytologist Stephanie Ellis: “Killing a cell is energetically expensive. Why not just remove losers through differentiation?”

Embryonic development illustrates. During development, mouse skin tissue surface area expands by a factor of 30 in a week’s time. The cells within proliferate – first as a single layer, then in multiple layers.

If a cell is not doing its job during the single-layer phase, it is cannibalized. Lame cells cannot be tolerated when there is only a skeleton crew. If instead a cell is found wanting during the multiple layer stage, it migrates to an outer skin layer – acting as a barrier for a brief time before being shed.

“Cells communicate in order to generate organs and tissues of appropriate shape and function,” report Swiss cytologists Markus Affolter and Konrad Basler. “Cells in developing tissues are influenced by multiple signals that they process and integrate to control cell fate, proliferation, and patterning,” explains American cytologist Thomas Kornberg. Cells assess each other’s health through physical and energetic communications, and via housekeeping habits, such as the quality of debris that cells shed.