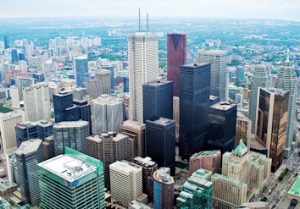 Toronto’s skyline began its ascent in the 1960s. Gleaming glass towers rose on the northwest shore of Lake Ontario. This shining beacon of civilization has at least one blind spot: it kills more birds than any other city on Earth.

Toronto is right in the flight paths of numerous migratory birds. It is the first barrier that avian air travelers literally hit when heading south from northern wilderness.

The hit is devastating. 500 dead birds can be found on a single morning in the downtown district. Up to nine million birds die each year from colliding with glass towers in Toronto. New York City only manages to kill two million birds a year. Admittedly, those are drops in the bucket compared to the one billion birds in North America that are killed annually by building collisions.

The victims are largely songbirds. Their swan song is swift, though many suffer concussions before crunching into the street. A tiny percentage survive, though scant few ever recover.

Architects and developers on the North American continent couldn’t care less. At the concerted urging of local environmentalists, Toronto adopted “guidelines” in 2005 that document the many ways that buildings curry to bird strikes. Unlike the birds, the guidelines have had no impact.

Arnold Glas, a German glass company, developed in 2011 a glass with ultraviolet warnings that birds can supposedly see. But it’s more of a joke than anything else, like the eco-friendly building awards ladled out to concrete-laden skyscrapers. (Concrete is a localized environmental disaster wherever it is produced.)

The features that can create a killer tower include glass reflectivity, sunlight orientation, night lighting, and whether the building has irregular shapes, all of which can engender bird strikes. An ultraviolet pattern embedded in glass does little to get a disoriented bird to straighten up and fly right.