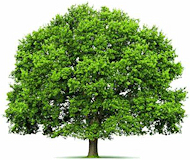 Planting massive numbers of trees to demonstrate concern about climate change is just a stupid publicity stunt at best.

“Both national and international governments have committed to plant huge numbers of trees to mitigate climate change, based on the simple logic that trees – when they photosynthesise and grow – remove carbon from the atmosphere and lock it into their biomass. However, trees also interact with carbon in soil, where much more carbon is found than in plants,” says British botanist Nina Friggens.

Disturbing the soil releases carbon to the atmosphere. “Planting trees in previously un-forested areas (or areas which have been deforested for centuries) creates profound changes to plant communities. This ultimately affects below-ground microbial communities, resulting in a reshaping of the ecosystem with consequences for stored soil carbon,” continues Friggens.

Planting trees may result in a net release of atmospheric carbon, thereby contributing to global warming. If planted trees do eventually absorb carbon in the balance, this outcome is likely to take decades.

There can be a sinister edge to political tree planting. Israel is planting trees across a significant swath of the Negev – a desert in the southern part of the country – to deny Bedouin residents from accessing the lands. Such pettiness typifies why humanity is facing demise.

It is already far too late to have any significant impact on global warming. Self-extinction by the end of the century is baked in if humanity does not take radical systemic measures to alter its economics and fortify communities against the grotesque environmental externalities capitalism created.