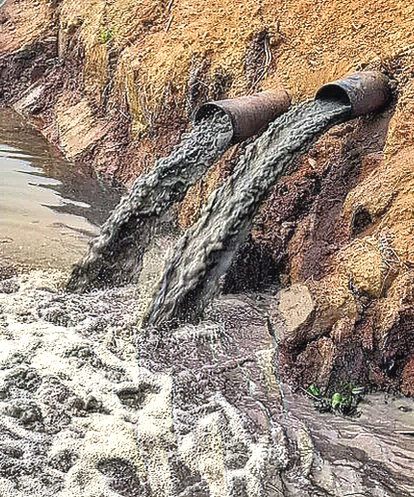 In his continuing campaign to pull the wool over the flock’s eyes, evil shepherd Trump destroyed the map of the egregious pollution produced by his cohorts. Unchecked pollution has a checkered American history.

Mostly as a paid propaganda campaign, the US federal government established a “Superfund” program in 1980. In the 30 years since, only a small percentage of American toxic sites have been “cleaned up” under the Superfund program. No toxic site, even touched up through clean-up, is a restored natural habitat.

The Superfund program was ostensibly intended to hold industries and businesses accountable for their pollution. The irony is that many of those same corporations were subsidized by the government, including the fossil fuels industry.

The government also created many toxic sites, notably the military and for nuclear development. US armed forces grossly pollute everywhere they set down with impunity. The American military is itself a weapon of mass destruction.

In lieu of companies paying cleanup costs, taxpayers footed the bill. Since 1995, the Superfund program has been grossly underfunded. The Trump administration has practically eliminated the program; not caring a whit about pollution, in harmony with those who support Trump.

It is impossible to find out how many toxic sites there are in America, but doubtlessly there are more than 10,000. There are over 2,500 toxic chemical sites in flood-prone areas of the US. Every state has at least 1. No government at any level bothers to track toxic spills from floods when they occur. A 2015 US presidential executive order requiring assessment of flooding potential for federally funded infrastructure was rescinded by President Trump in 2017.

American environmentalist Chris Sellers of EDGI: “As with so many other fronts in the Trump administration’s interlocking wars against science and environmental regulation, the prevailing hope seems to be that pushing the facts out of sight will diminish Americans’ concerns about the environment.”