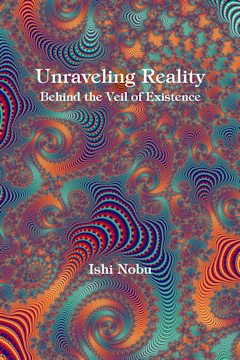 Unraveling Reality: Behind the Veil of Existence introduces the Spokes series with a survey of the heavens and Earth, a look into life, and an explanation of the nature of reality. This brief synopsis brims with material that illuminates the perspectives which Spokes coveys.

From the chapter on Knowledge:

Throughout history, astute observers have sensed that there is more going on than first appearances convey; so there has been a restless search for general principles and the foundations underlying Nature. This was the thrust of natural philosophy that was inadvertently abandoned by science in its embrace of empirical matterism.

Therein sits an open secret. Science has provided ample evidence which may be drawn upon to understand Nature and its derivation, but refusal to step beyond the phenomenal blocks the way. Behind this obstinacy is the religious belief that actuality is reality. Ignorance is learned, and then insisted upon (smug ignorance); whence the myth that the sensate world is all that there is.

From the section on Unseen Forces:

As da Vinci intimated, the seminal mystery lies not in what is, but in the endowment which makes movement: the motive for motion. Modern physics was forged from explaining fields and the forces that impel them; an invisible realm to us, with only effects to guide comprehension. This is the first lesson of physics: that what is apparent is either only part of Nature or is wholly deceptive.

From the section on The Mind:

The mind is an intangible instrument which constantly creates the impression of us having a window onto the world, and into oneself.

Dreams illustrate that the mind is a fabricator rather than a straightforward presenter of Nature. While awake, what phenomenally appears before us is a phantasmagoric multimedia display, imaginatively sewn from disparate sensations into a consistent story. The persistence of an illusion does not make it real any more than the repetition of a lie makes it true.

From the section on Vitalism:

Life defies physics. Science has no accounting for how life can exist. Quite simply, we accept what cannot be denied.

The principle of vitalism states that living organisms possess a fundamental force which distinguishes them from inanimate matter; what is sometimes called a soul.

The idea of vitalism is prehistoric. Ancient Egyptians wrote of vitalism. 2nd-century Greek anatomist Galen, the most accomplished medical researcher in antiquity, held that vital spirits were necessary for life.

In embracing the concept of souls, vitalism underlies most religions. For Christianity particularly, a focus of quixotic inquiry has been pinpointing the superiority of humans – elucidating qualities that make man unique, such as being the sole possessor of a soul, thus justifying man’s dominion over the Earth.

From the mid-17th century, during the Age of Enlightenment, vitalism lost its vitality. The idea of a spark of life was abandoned; supplanted by a pseudo-scientific, religious belief in reductionist chemistry, wherein life was merely a peculiar molecular combination.

For well over a century, ambitious chemists have repeatedly tried to reproduce life’s origination. All they ever got was organic muck.

Biologists have documented countless instances of life adapting to resource opportunities and changing environmental conditions. Adaptation indisputably has an aim.

Evolutionary theorists studiously ignore this obvious teleology (goal orientation) by using the vacuous phrase “natural selection” about evolution. Such facile deflection points out the central problem of science based solely on factual evidence: empiricism can offer no explanation for how life, consciousness, or adaptive evolution are possible.

From the tidbit on Tardigrades:

Though tardigrades arose over 600 million years ago, well before arthropods, they have a physiology similar to larger animals that evolved much later. Water bears have muscles, a complete digestive system, a brain and nervous system.

Tardigrades are tough: able to withstand extreme heat (125 °C), freezing (–272 °C), desiccation, and even survive the rigors of space. They do so via miraculous adaptations.

In preparation for drying out, a water bear curls into a ball, termed a tun. Then a tardigrade preserves itself as a dry husk: nothing more than a tiny pearl of powder.

Adding water allows cellular revitalization. But what kept a tardigrade alive in the meantime?

From the section on Saltation:

A sudden leap in specific evolutionary development is termed saltation. Saltation dispels Darwin’s gradualist “natural selection” hypothesis of evolution. Most saliently, saltation shows the creative flair of Nature in conjuring diversity. Many flowering plants, including the multiplicity of orchids, are the product of saltation.

From the section on Staying Fit:

For our muscles to stay in shape, we must exercise them. Rodents face a similar situation.

Migratory geese may fly thousands of kilometers at a stretch. To get themselves fit, geese simply sit on the water and stuff themselves with food. Yet in doing so, they develop stronger hearts and bigger flight muscles.

In a wide variety of animals, seasonal signals prompt various alterations, including those related to fitness. Migratory birds undergo innumerable genetic changes that are stimulated solely by the changing hours of daylight.

Bear muscles do not waste away despite months of inactivity. Before hibernating, bears’ bodies spontaneously release muscle-protecting compounds into their blood.

In needing to exercise to keep fit, rodents and humans are exceptions in the animal kingdom. Evolutionary trade-offs prompted this. Our ancestors lived unpredictable lives, particularly regarding food supplies. Hence our body’s ability to add fat more readily than any other animal.

Our physiology evolved to let weight and fitness fluctuate depending upon food availability. Rodents face similar environmental conditions, and so have a selfsame set of traits related to musculature.

So, we see that muscularity is ultimately a matter of energy, not physicality. That muscles may tone themselves is evidence that our bodies are sustained by an energetic force, species-specific in its dynamic characteristics.

From the chapter on Beyond Phenomena:

We naturally tend to take for granted that what we perceive is reality. Belief in our senses is instead a fantastic cage we build for ourselves, and so bound our comprehension. To get out of the cage requires the key to the nature of reality.

Though we know thought to be abstract, matterist science insists that the brain conjures the mind. At issue here is the heart of all philosophical thought and scientific endeavor: the nature of Nature and, by extension, the essence of reality.

3 possibilities exist: dualism, matterism, and energyism. Our everyday experience is dualism, with a distinct body and mind encountering an outside world.

If, instead, reality is a unity, the proximate illusion of duality flows from a singular source. The wellspring of existence may either be from matter (matterism) or otherwise involve a unified field of Consciousness (energyism) which somehow creates a figment of materiality.

Matterism and energyism are diametric concepts. If Nature emanates from a unicity, it must exclusively be either material or noumenal.

The grand delusion of matterism comes in confusing correlation with causality. Physical intelligence system activities, such as brain waves and chemical reactions, may synchronously coincide with mentation; but it’s not the brain telling the mind what to think.

Empirical science only goes so far. To mistake tangible actuality for the finality of reality is to fall into the arms of fantasies no different than the religious tenets which science has exposed as bogus.

All that science has revealed shows that matter is not the foundation of reality. Quanta being coherent energy fields indelibly indicate that the seeming solidity of existence is ultimately illusory. The nature of the atom corroborates this, and the power of the mind-over-matter confirms it. Moreover, matter and energy alone cannot explain the order that pervades phenomena.

Matter is a transmutation of energy. Energy is nothing but a constructive abstraction. Therefore, reality must ultimately be immaterial.

Unraveling Reality introduces the science of reality that no one else exposes. Spokes begins in earnest with Spokes 1: The Science of Existence.