The apparent orderly consistency of Nature is what inspired the search for its “laws”; yet much remains hidden.

“Science copes badly with descriptions of processes occurring in Nature. We are perfectly able to describe the states at the beginning of the process and at its end. But what happens in between?” ~ Polish chemist Robert Holyst

For instance, plant photosynthesis is optimized to quantum perfection. There is no solely physical explanation for how this could have ever been achieved.

“There must be something more going on than just noise.” ~ American materials scientist Martin Glicksman 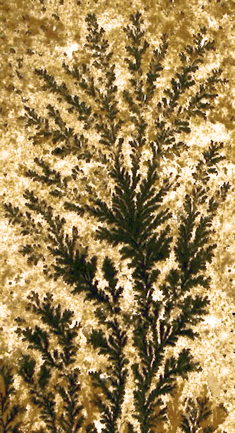 Crystallization is a thermodynamic process that produces the delicate fractal patterns seen in snowflakes, minerals, and metals. Experiments in soundless, microgravity conditions led to the 2017 discovery of an energy field guiding the branching, dendritic microstructures which naturally form during solidification of metals and alloys, or in percolating mineral solutions.

The picture is a natural formation of manganese oxide dendrites on a limestone bedding plane, ~1.5 cm wide. The image may easily be mistaken for a plant growth pattern, which takes shape to optimize availability to sunlight, a primary energy source upon which plants rely. Here we see selfsame patterns guided by distinct energies to quite different ends.

The fractal beauty of clouds is another example of patterning shaped by a combination of temperature, humidity, and wind. The layering of diverse cloud types and shapes in the sky can be a stunning display, especially near sunset, when light paints the clouds in blazing red-oranges and icy gray-blues.

Aesthetic patterns are found in various inorganic manifestations in Nature, all developed through energetic guides. It is as if Nature intends beauty.

“Quantum mechanics occupies a very unusual place among physical theories: it contains classical mechanics as a limiting case, yet at the same time it requires this limiting case for its own formulation.” ~ Lev Landau & Russian physicist Evgeny Lifshitz

Any theory describing existence must be able to behave like classical theory at some limit. Although this is a natural assumption, given that we live in a classical world, it imparts strong constraints on the structure of any non-classical theory. One of those constraints is entanglement: that the diversity of existence is ultimately woven from a coherent, unified field.

The transition from the quantum realm to the everyday ambient, where classical physics applies, happens through 2 mechanisms: decoherence and perception.

Whereas quantum mechanics may be inferred through mechanical measurements, such small-scale specificity is beyond our direct observation; hence, the world always appears classical to us.

At the quantum scale, existence is always coherently entangled: a wave of possibilities which emerge decisively at every instant via decoherence. Decoherence is a loss of coherence through environmental interactions that are thermodynamically irreversible. A classical world coming into view necessarily involves localization and quantization, which appear as an absence of entanglement. Decoherence generates the diversity we perceive.

In contrast, under superconductivity, electrons merrily skedaddle without resistance. Superconductivity comes from cooperation: coherently paired electrons with opposite spins and momenta effortlessly dance to their destination.

A material may go from being antiferromagnetic to superconductive. The transition phase between these highly ordered states defies characterization, as it does not correspond with any model of how metals interact.

Discontinuities exist at spatial scales, and in certain phase transitions, which defy understanding. The gap between the quantum and classical worlds, and the path to superconductivity, are exemplary illustrations of inscrutable seams in the fabric of existence.