“Mass and energy are both but different manifestations of the same thing.” ~ Albert Einstein

With special relativity came a corollary, captured in the succinct equation: E = mc2, where mass (m) and energy (E) are different manifestations of the same thing, irrevocably related to the speed of light (c).

Classical physicists conveniently multiplied an object’s mass by the square of its velocity (mv2) to come up with a useful indicator of its kinetic energy: E = mv2. Einstein, in his relativistic equation E = mc2, simply substituted the speed of light (c) for the classical notion of velocity (v).

“The mass of a body is a measure of its energy content.” ~ Albert Einstein in 1905

In 1907, both Planck and Einstein explicitly expressed that mass is a form of energy (m = E/c2). Other physicists contemporaneously converged on the same equation.

Mass-energy equivalence is astonishing in its implications. The speed of light squared is a huge number: equal to 9.5 light-years. m = E/c2 means that even the smallest amount of matter locks up an unimaginable amount of energy. In the mid-20th century, nuclear physicists would take this truth to a terrible fruition.

“I am become death, the destroyer of worlds.” ~ American physicist Robert Oppenheimer on his creation of the atomic bomb, inspired by Hindu mythology (1945) 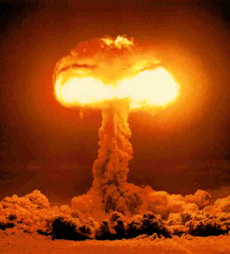 Uranium and plutonium are used for atomic weapons and nuclear power. Exuberantly exhibiting the nuclear weak force, they both decay by emitting alpha particles: bits of atomic nuclei.

Nuclear fuel elements are energy dense. The amount of free energy contained therein is millions of times that of chemical fuels, such as gasoline.

The massive radioactivity of nuclear weapons owes to the fact that only a tiny fraction of the material in a bomb fissions. An atomic blast strews the leftover radioactive matter hither and yon.

The American atomic bomb that destroyed Hiroshima at the close of World War II, loaded with 64 kg of enriched uranium, converted only 700 milligrams of matter into energy: equivalent to 70% of the weight of a US dollar bill. If the entire uranium package had fissioned, it would have vaporized the solar system and then some.

Despite the minute fraction of material that actually fissions in an atomic bomb explosion, the energy released is impressive, to say the least. But that spent energy is itself negligible to the energy employed keeping together the neighbors of those atoms that explosively split apart.

The power of the strong force – which holds all matter together – is unimaginable. Then consider the energy involved in the massive black holes which spin galaxies about.

Contrasting the strong force to the gravitational pull of black holes is an apple-and-oranges comparison. Each exudes its power in its own, unique way.

The strong force is overwhelming at distances the size of a nucleon. Outside of that it is practically nonexistent.

Conversely, the spacetime distortion of gravity is imperceptible at the quantum scale. Gravity’s tangible effect is only had at cosmological expanse.

Energies from light to dark, from subatomic to cosmic, each with their own pattern, limits, and method of acting on matter or other energies; altogether of unaccountable extent, yet holistically harmonious in presenting a coherent universe. The varieties of energy illustrate Nature’s fondness for diversity in all aspects.

“How dare we think that the physics we have today is all that there is.” ~ American engineer and technologist Steve Justice

“Atoms consist of particles and these particles are not made of any material stuff.” ~ American physicist Fritjof Capra

What appears as solid matter simply has no solidity. Instead, infinitesimally tiny quantized fields of energy interact in specific ways to create an illusion of materiality.

Particles are also coherent in their discourse among themselves. Their masses, spins, and charges create a cohesive labyrinth which dictates how their interactions proceed. All of it is the dance of energy, ruled over by a mathematics.

The simplest atom – hydrogen – comprises a single proton and an electron, orbiting the proton at a relatively enormous distance, along a forever-fluxing probabilistic path. The seething ground state, laden with virtual particles, enfolds this pair of particles, adding to the atom’s heft and affecting its energetic gyrations.

Every atom is 99.999+% empty space. If devoid of void, all the matter in the universe would fit within the size of a single pea, less than 1 cm in diameter. Seemingly solid matter is a very thin gruel, forgetting in the moment that matter is nothing more than coherent energy. But what exactly is energy?

“We’re electrical items, and when we die the energy goes somewhere else.” ~ English actor Dominic Monaghan

Energy is commonly defined relatively as the ability to put matter to work. As matter is energy in a specific form, that definition is a tautology.

More formally, in physics, energy is a conserved extensive property of a physical system. Parsing that definition for content leaves a void.

Conserved means sustained; in this instance, self-contained. The quantity of energy within a defined system is considered constant. A physical system is presumed to be closed; that is, no possible leakage of energy.

Physicists assume that the 4d universe is a conserved physical system, with energy as its defining characteristic (extensive property). Virtual particles and other ed weirdness show this critical assumption of 4d containment to be false.

Energy cannot be observed directly. It can only be calculated by its comparative state and measured only by its effect on visible matter. In and of itself, energy has no presence. Energy is instead merely a relative reference.

What is energy? An abstraction which appears phenomenal by its effect on matter.

“Energy is an abstract concept introduced by physicists in order to better understand how Nature operates. Since it is an abstract idea, we cannot form a concrete picture of it in our minds, and we find it very difficult to define it in simple terms.” ~ American physicist Carlos Calle

All our senses rely upon energy to function. Light is nothing but energy packets which terminate their journey in our eyes. The mechanical vibrations that compose sound and provide for touch are not matter but movement of energy which impacts physiological receptors which themselves communicate employing energy. We think we live in a physical world only because of energy. Whereas energy is essential, matter is merely instrumental, not causal.

The stage upon which the universe appears is spacetime, which is defined by energy and its entropic counterpart: gravity. As energy is really nothing at all, and gravity culminates into singularities of nothingness (black holes), Nature – the exhibition of existence – must be illusory. So, what is its source?

Before answering, let’s first look at life, and how we think we know the world.