“The world doesn’t change in front of your eyes, it changes behind your back.” ~ English author Terry Hayes

Evolutionary biologists aim to answer a single question: how has the great diversity of life been productively generated?

The apparent increase in adaptive complexity of organisms over the history of life is one of the great mysteries of biology. ~ American evolutionary biologist Daniel McShea

While there are many common fallacies, there is no mystery. One common fiction is that randomness plays a part in evolution. Another is that evolution proceeds without objective.

Nothing in Nature is random. A provocation may be obscure, but it is there. Saltation and adaptation dispel the prospect that randomness is involved in evolution.

Many evolutionary biologists favor the idea of randomness because the implications of the alternative frighten them into befuddlement. Acts of Nature as intentional is termed teleology. Evolutionary biologists cringe from this concept because it puts natural causes outside the observable realm, and thereby makes the beating heart of Nature unscientific in their empirically minded minds.

Biological evolution obviously exhibits intent: survival and reproducibility. The entire history of life is a dramatic presentation of organisms’ will to survive and propagate. That calamities may render adaptation awry only makes the show a spectacular melodrama.

No sane evolutionary biologist denies survival and perpetuation as driving forces. The objection is only the obvious ramification, thereby creating a silly paradox of denial in refusing to ascribe any impetus behind evolution.

Murres are sociable seabirds that live off northern coasts. They nest in tightly packed colonies on craggy seaside cliffs. The ledges on which murres lay their eggs can be quite narrow: sometimes as shallow as an egg is long.

Eggs are normally round and prone to roll if given the opportunity. Conicality is critical to an egg’s tendency to wander off under the influence of gravity when sitting on an uneven surface, such as a cliff ledge.

Unsurprisingly, the coherent force behind Nature saw fit to make murre eggs uniquely pointy. Otherwise, lacking eggs from which to hatch, murres would naturally be in short supply.

Lizard tails are variously colored to confuse or evade predators, depending on who the lizard killers are.

To have a predator think that its tail is its head, and so facilitate evasion, lizards with weasels or snakes as nemeses have vivid blue in their tails – a color which both snakes and weasels can see. In lizard populations where snakes are the main enemy, lizard tails reflect ultraviolet, which snakes can detect but weasels cannot.

Where birds are a threat, lizard tails are a cryptic brown. As birds have keen sight, the best a lizard can do is have a camouflaged tail.

The precise arrangement of microscopic light-reflecting platelets creates the requisite visual effects which appear in lizard tails. Creative pigmentation techniques are employed by many animals and plants to create specific looks, some of which are quite dazzling, or rather drab, depending upon what works best for an intended purpose.

Such specific adaptations illustrate how localized coherence attunes the traits of organisms to provide at least fighting odds of survival. 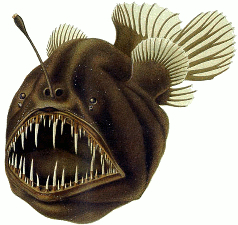 Anglerfish are a bony fish that arose 130 million years ago; long enough to have adapted to a wide variety of habitats, and so have a worldwide oceanic presence.

Different anglerfish do their angling at different depths. Some live on continental shelves. Most are deep-sea denizens. What unifies anglerfish is a fleshy growth (illicium) from the head that acts as a lure (esca).

Only female anglerfish have illicium. Much-smaller males live solely to find a mate, to which they attach and provide a continuing sperm supply, fed by their mate as compensation. Those males that fail in their life mission quickly die.

The illicium is a modified dorsal fin. Dorsal fins typically stabilize fish: preventing unintentional rolling and assisting in sudden turns. In anglerfish, the illicium acts as a fishing rod.

In deep-sea anglerfish, at depths where sunlight does not penetrate, an esca is bioluminescent. This little light lures small fish upon which the anglerfish preys, and as well advertises for mates.

The source of anglerfish luminescence comes from colonies of symbiotic bacteria that dwell in and around the esca. Some bacterial species only light up when fed by the fish, which provide the vital food ingredients for the bacteria to luminate.

Esca precisely strobe on and off based on anglerfish control. To accomplish this, an anglerfish communicates with its esca bacteria energetically, as chemical communication would be too slow to signal the millions of luminescent symbionts to act synchronously at sufficient speed.

The anglerfish is one of innumerable examples of intricate symbiotic adaptation that only be explained teleologically, and, in the instance of anglerfish, with interspecies communication links that are beyond purely physical means.

The blueprints for manufacture of organisms are physically accomplished via genetics. From an evolutionary perspective, this field of study has been ripe with confusion between mechanics and process.

Smith’s laughable oversimplification is ridiculously wrong. Examining the microscopic mechanisms of DNA and its companions is nothing more than looking under the hood of Nature’s vehicle to inspect the pistons. It does not explain how the engine works, or how it came to be.

Functionally, genes are encoded molecules of designs for development. There simply cannot be a design without conceptual and compositional processes. This is the irrefutable teleology of Nature.