Attracting pollinators is essential to the reproductive success of flowering plants, which evolved with their animal admirers in mind. Besides the colors we see, birds and bees see ultraviolet light. To them, flowers look even more beautiful than they do to us, with intricate patterns and subtle colorations undetectable by the human eye.

A flower’s corolla (petal structure) is a visually arresting billboard that titillates with its promise of nectar and pollen rewards within. A pleasing scent adds to the allure. The petals themselves offer easy-grip textures or other inducements to visitors. 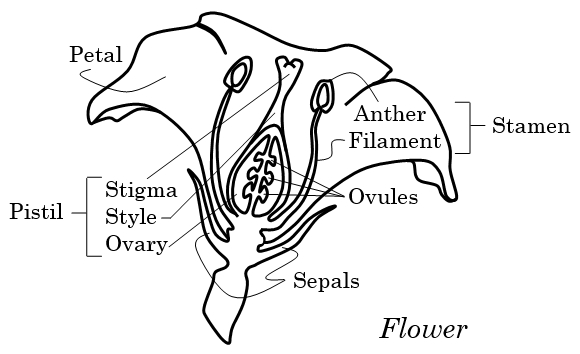 “The coloration of flowers is due to the wavelength-selective absorption by pigments of light backscattered by structures inside the petals.” ~ Dutch evolutionary biologist Casper van der Kooi et al

A mere 20–50% of the sunlight that strikes a flower is reflected. The rest passes through the petals, giving them a pretty translucent appearance. Flower translucence provide light to plant parts that lay below and creates an overall more navigable terrain to pollinators.

“The insect visual system corrects for differences in intensity. This is an important adaptation: insects need it when flying from a dark forest into a sunny meadow. They select flowers on hue and color saturation, but not on brightness.” ~ Casper van der Kooi

Producing pigment takes energy, so flower petals are organized into layers for maximum effect. Plants with flowers close to the ground only have pigments on the upper side of their petals. Others, such as poppies, which need to lure insects from various directions, put pigments on both sides of their flowers.

Chemistry has a lot to do with floral multimedia presentations. Plants also masterfully use subtle tricks of physics to achieve irresistibility for their flowers and tilt the transactional bargain in their favor.

The color of most objects comes from chemical pigments that selectively absorb certain wavelengths of light. Flowers use pigments to provide contrast with the surrounding green foliage.

There are also physical means to generate color, or, at least, to modify the color that would be produced by a pigment alone. Plants generate dazzling optical effects by exploiting light’s interaction with microscopic structures in their flowers.

The snapdragon is a flowering plant native to the Mediterranean. The name comes from the flowers’ reaction to having its throat squeezed: the front of the flower snaps open like a dragon’s mouth.

The snapdragon differs from its close relations by having a genetic modification that makes the cells on the surface of its flowers conical rather than flat. This conical geometry acts as a lens: focusing light into the vacuole containing the flower’s pigment, while also scattering more light reflected from the mesophyll (the interior of the leaf). The effect is a more intense coloration on a petal that sparkles.

By playing with the light, plants are better able to strut their wares to potential customers at a distance. Snapdragons with conical flower cells receive more pollinator visits and produce more fruits than those with flat cells. Conical cells are present on most flowers of other species, especially on the parts directly exposed to pollinators.

Having a smooth, lustrous surface is an effective way of being conspicuous. This can be improved upon by careful accenting. Some flowers add touches of gloss on petal tips that glitter when light hits at a certain angle.

Iridescence is another optical trick that flowers employ. Lustrous changing colors are achieved by microscopic structures on or just below a petal’s surface which generate color by diffraction and/or interference.

Several plants produce nanoscale ridges on the surfaces of their flower petals to create a blue-to-ultraviolet color effect that pollinating insects can see. This ‘blue halo’ is an effective advertisement in attracting a desirable clientele.

“Disorder itself is what generates the important optical signal that allows bees to find the flowers more effectively. Petal ridges that produce ‘blue halos’ evolved many times across different flower lineages, all converging on this optical signal for pollinators.” ~ Beverley Glover

Insects use their sensitivity to polarized light in several ways, from general navigation to finding food and nesting sites. Knowing this, flowers often display polarization patterns that emerge from micro-differences in geometric surface structure.

Color is not all. Plants smartly pattern guidelines which lead pollinators to the reward they seek while loading them with the pollen that gives pollinators their name.

It’s not easy to land on a flower moving in the wind, and then find the correct approach angle to access the reward. With this in mind, many plants evolved strategies that take advantage of the interplay between pollinator, flower surface, and gravity, to limit floral access to certain groups of animals.

A simple way in which many plants improve the grip and handling efficiency of their flowers is to use conical cells on the petal. These improve foraging efficiency for bees, by providing an interlocking surface for bees’ tarsal claws, which is especially important when flowers are handled at difficult angles, or in windy or slippery conditions.

Some flowers manipulate pollinators by selective loss of these cells. Several plants on Macaronesia independently dropped the use of conical petal cells when transitioning from insect to avian pollination. This evolutionary change makes flower petals more slippery to insects who drop by, thus minimizing their nectar robbing. Even bee-pollinated flowers selectively distribute their epidermal cell types to control the physical forces acting on foragers.

Impatiens frithii, endemic to Cameroon,  is a small, inconspicuous plant when not displaying its bright red flowers. Impatiens manages specific pollen placement for its pollinating sunbird by a twist in its flower’s nectar spur, which curves upward. When the bird inserts its bill to feed, it exerts a physical force that causes the flower to rotate 180 degrees, placing pollen below the beak. To achieve optimal pollen placement, the flower has a flexible stalk that can tolerate the anticipated rotation by the bird.

Trigger plants play an even more impressive mechanical trick. The male and female reproductive organs are fused into a floral column which acts as a sensitive trigger: snapping down within milliseconds when a pollinator alights, covering the insect with pollen.

Slower movements can also prove highly effective at pollen placement. Stamens of the prickly pear cactus move inwards over the course of 2 to 20 seconds after being touched by an insect of appropriate weight. The movement forces a pollinator to push past the anther to exit the flower, increasing pollen distribution.

Plants harness electrical charges to improve pollination. Pollinators accumulate an electrostatic charge from flight. This induces an electrical field with flowers, which are also charged.

The field strengthens as a pollinator approaches, facilitating pollen transfer from the anther to the visiting insect or bird, and from the pollinator to the stigma. Foraging bees sense this field and use it to determine whether a flower is worth visiting.

A distinctive field lingers on a flower after it has been visited, thus indicating its reward status. This status signal minimizes wear on a flower, by not having pollinators fruitlessly land. It also gives flowers a competitive edge by honestly advertising the potential pollinator experience.

2/3rds of flowering plants rely upon insects for cross-pollination, mostly bees and wasps. These pollinators are paid in pollen for their efforts.

The other 1/3rd of angiosperms found insect pollination unsatisfactory and switched to avian assistance. Changing clientele required significant shifts in reward and signage. Birds want nectar, and they won’t bother with a flower that doesn’t advertise that soft drinks are on tap.

As far as what pleases the eye, birds like flowers that reflect lower frequencies than insects do – reds rather than the blues that bees like.

Whether bird or bee, each species of pollinator has its own set of color preferences. Further, there is considerable competition among angiosperms to attract effective pollinators. Plants precisely attune their flowers and fruits to present the most alluring display to the specific audience they intend to captivate. Plants also design their seeds to survive being eaten alive.

“The flowers within each pollination category are clustered at wavelengths that maximize their distinctiveness to the visual systems of their respective pollinators.” ~ Australian vision scientist Adrian Dyer et al

Fiddling about with colors to put on flowers or fruits would be a surefire formula for extinction. The obvious underlying question: how do plants so precisely know what their prospective clients like?