Plants live a life of conscious chemistry. Their thoughts and behaviors are exercises of molecular awareness. The contrast to animals is incomparable.

Deciding priorities and energy allocations is so enormously complex that no plant behavior is autonomic. There is no plant unconsciousness.

One aspect of existence that is the same for both plants and animals is memory. Plants remember their ecological interactions and derive meaning from them.

Sundews and the Venus flytrap are carnivorous plants that exercise discretion in food selection. 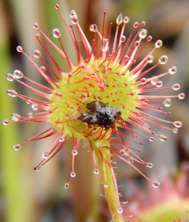 Sundews have leaves covered in long glandular hairs that secrete a sticky mucilage. Any insect landing on them becomes enveloped in the adhesive gum. All the leaf tentacles gradually bend over to ensure an entrapped prey, whereupon digestive enzymes are released, and dinner is served.

The Venus flytrap has V-shaped leaves which shutter any creature careless enough to forage for food there. It too lets loose juices to chemically cook and consume its hapless visitors.

Perchance a bit of debris strays on a sundew or flutter a Venus flytrap shut, the plants sense they have caught something indigestible. A flytrap quickly reopens for business. A sundew loosens its grip to entertain something savorier. Neither bothers to wastefully release enzymes when there is nothing good to eat.

Sundews are a less patient sort than Venus flytraps, which are content to await their victims. If a sundew leaf smells a meal within reach, the leaf bends toward it until it is within a tentacle’s grasp.

“Plants have evolved complex sensory and regulatory systems that allow them to modulate their growth in response to ever-changing conditions.” ~ American botanist Daniel Chamovitz

Plants sense their environment, and respond by adjusting their activity, morphology, physiology, and phenotype. They account for their resources and plan accordingly.

(Illustrative of consciousness, plants can be anaesthetized.)

Lianas are climbing vines that root in the soil and send themselves skywards. They will not attach themselves to particular trees even if the opportunity presents itself. The trees lianas refuse are those least suited to their climbing style and objective: smooth trunks with umbrella tops that won’t do them much good when they reach the canopy.

Deception is a very deep feature of life. It occurs at all levels – from gene to cell to individual to group – and it seems, by any and all means, necessary. ~ American evolutionary biologist Robert Trivers

The botanical kingdom is rife with beguilement. 5% of flowering plants entice pollinators via various ruses. Others deceptively attract insects for their own consumption.

Carrion flowers smell of rotten meat to attract scavenging beetles and flies, which the plants then slather with pollen. Passion vines, beloved by some butterflies as food for their caterpillars, have yellow spots on their leaves that look as if eggs had been laid by a pregnant female, and so dissuade further deposits. Numerous carnivorous plants lure insects with sweet odors only to devour them.

Deception plays an important role in plant defense. Plants having their leaves chewed on by insect pests emit a chemical cue which tells the insect that the plant is damaged and a poor source of food. These airborne missives are noticed by neighboring plants, warning them to prepare their own chemical defenses. To be forewarned is to be forearmed.

Plants can tolerate modest injury without affecting their fitness. Goldenrods, for example, can tolerate losing up to 30% of their leaves; any more and they are goners: the will to live is lost. 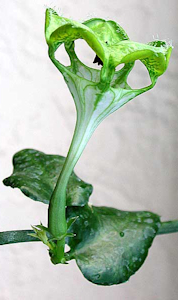 The parachute plant has cone-shaped flowers which trap insects that come to its blooming parlor, letting them escape only after the flower has wilted. Incarcerated insects leave covered in pollen.

Freeloader flies are particularly attracted to parachute plants. These flies have a predilection for lapping up the vital fluids that leak out of honeybees after being bitten by spiders. Parachute plants lure freeloaders by concocting the scent of a dying bee. If you wonder how a plant knows what a dying bee smells like, and what it might do for business, you’re on the right track.

Many plants have subtle mechanisms that promote production of protective compounds only when needed. They know what time it is, and the time of day that common pests rouse themselves to bring ruin. In anticipation, plants ramp their defenses in likely locations of assault.

Growth itself is a decision-laden process. A plant must decide how best to allocate its resources amidst an incredible diversity of options, such as root, stem, leaf, or bark growth.

“Because plants cannot run away from danger, they have evolved defenses against pathogens and herbivores that rival and even exceed the sophistication of many animal immune systems.” ~ American ethologist Andrew Zink & Chinese botanist Zheng-Hui He

Plants possess a wide repertoire of defenses and healing remedies. By recognizing signature molecules of microbial malevolence, plants are actively aware of an infection, and consciously decide how to deal with it. Among other options, they might decide to sacrifice a region around the infected area to prevent its spread.

Plants must constantly assess the probabilities of favorable outcomes given an ample array of possibilities: a cognitive skill known as risk sensitivity. Experience and calculation of relative gain determine decisions in plants just as they do in humans and other animals.

In one set of experiments, pea plants were given the opportunity to select, via root growth, areas which either had a consistent amount of nutrients or fluctuating food levels. When nutrients were abundant where they were, plants played it safe, opting for consistency. But when living in suboptimal soil, plants preferred to take a risk.

Those flowering plants with both female and male sex organs recognize and reject their own pollen, thereby averting inbreeding. With intricate genetics behind it, considerable cognition is involved in this decision process.

Plants solve problems and meaningfully communicate with their neighbors and other species in the appropriate molecular language. Plants understand and manipulate other species chemically in a variety of ways, from soliciting and assisting desirous cooperators to thwarting and killing those with nefarious intent. Human intelligence is puny compared to that of flowering plants, which have an earthy savvy that has been honed over the past 245 million years.