“It all looks fine to the naked eye, but it don’t really happen that way at all.” ~ English musician Pete Townshend in the song “Naked Eye” (1971)

Because it seems so outlandish (as does quantum physics), few apprehend energyism as the nature of reality. Under energyism, consciousness passively witnesses while the mind cognizes. Any semblance of a physical intelligence system is merely a correlate. The mind and body are an apparent but illusory duality. Materiality is formed by energy, which is immaterial.

Appreciating energyism scientifically requires careful recognition of the difference between proximate appearance (actuality) and (ultimate) reality. A similar issue arises in quantum physics: is a quantum a particle, or a coherent, localized field? The answer is an interaction, not an object; a field, not a particle. Nonetheless, all that ever may be experienced is particulate. Fields are only felt from their effect on matter.

Before proceeding, we must come to terms with this strange landscape of a fundamental immateriality. Under energyism, phenomena are only proximate. Reality is ultimately of noumenon: nonexistence.

In that the mind’s workings can be observed (introspection), the mind cannot be considered the first cause. Contrastingly, the passive witnessing faculty of consciousness is the ground state.

Actuality and reality are day and night. There is a vast, irreducible void between proximate phenomena and an ultimate noumenon. The bustle of multifarious existence emanates a singularity of conscious nonexistence.

The tangible world is a mirage. A brain may putter away, but it and other material objects are ultimately figments of the mind, without independent existence.

“The world exists within oneself. The world is a creation of your consciousness.” ~ Nisargadatta Maharaj

Energy is the coherent medium by which Nature manifests. Construing energy as confined within any physical system – such as the universe – is inapt because energy is immaterial. The hypothesized ‘laws’ of thermodynamics are fictional.

Energy is what it takes to get matter to work. Only the effects of energy on matter are phenomenal. Any measurement of energy is always the impact that it has on a material substance.

Understanding energy for what it is (an abstraction), and what it is not (material), you can see that the supposed unbounded energy of the ground state is mere mathematics. If the nothingness of vacuum has energy beyond imagination, how can it be phenomenal?

“The universe does not violate the conservation of energy; rather it lies outside that law’s jurisdiction.” ~ Australian astrophysicist Tamara Davis

Gravitational threads create entropic distortions in the fabric of the universe, weaving a web which guides celestial affairs: a stringy equivalent to black holes, which steer galaxies. Along with the ground state, these are energetic instances of nothing coherently shaping everything.

Energyism has been scientifically validated countless times; a fact that is universally ignored because researchers never question their assumption of matterism. Instead, scientists are sometimes left scratching their heads at inscrutable discoveries. Conversely, some who should be brain dead are not.

In 1906, German physician Alois Alzheimer had a patient with sudden, profound memory loss, among other psychological deteriorations. In an autopsy, he found her brain physically ravaged. How she had managed before her memory crisis was inscrutable.

An unknown percentage of people with brains chock-full of the plaques and tangles that characterize Alzheimer’s disease maintain razor-sharp memory and mental acumen.

“These people, for all practical purposes, should be demented.” ~ Changiz Geula

This is but one of innumerable scientific findings which cannot be accounted for physiologically.

Olfaction is common to all life forms: microbes, protists, fungi, plants, and animals. Disparate organisms have distinct biomechanical means for detecting odors, yet their senses of smell are the same. Houseflies, which have a dissimilar olfactory system than humans, smell molecules in the same way; as do fish, with their distinct olfactory physiology.

The widely accepted explanation for how olfaction works is a shape-based, lock-and-key fit between a molecular odorant and its biological receptor. But the shape theory fails to explain why similarly shaped molecules have different smells. More importantly, atomically hiding a molecule’s functional group does not mask the group’s characteristic odor; something which the shape hypothesis cannot account for.

There is no evidence for the shape hypothesis of smell, but the explanation is preferred because it is a purely physical one. In contrast, olfaction via vibrational quality smells odorously ethereal to an matterist.)

“A remarkable feature of olfaction, and perhaps the hardest one to explain by shape-based molecular recognition, is the ability to detect the presence of functional groups in odorants, irrespective of molecular context.” ~ Lebanese biophysicist Luca Turin et al

Olfaction works by sensing the vibrational qualities of an odorant. The isotopes of molecules (molecular variants by the number of neutrons) smell discernibly different, despite having identical shape. Conversely, divergently shaped molecules with similar molecular vibrations smell alike.

(Isotopes can react quite differently in the body. For instance, heavy water, with neutron-enriched hydrogen (deuterium), is toxic to humans in large quantities. Normal drinking water is “light water,” with hydrogen not having any neutrons.)

The specific mechanism for olfaction by vibration involves quantum electron tunneling, an extra-dimensional dynamic. Smell works more like a “swipe card” than the lock-and-key mechanism proposed by the shape hypothesis.

Nature has a deep evolutionary conservation for providing olfaction to all organisms. It does so through energetic biomechanisms which belie physiology as being causal.

“Even the simplest visual scene is nothing short of a miracle.” ~ Indian neurobiologists Chaipat Chunharas & Vilayanur Ramachandran

Our sight seems so effortless that we take it for granted. But vision is physiologically impossible, for numerous reasons. First is the nature of photons. Sight is a matter of refractive absorption and translation. We can see things because the atoms of objects from which photons bounce off absorb specific photonic wavelengths. Every time a photon is banged up, its story changes.

The human eye is an odd construction. Before being absorbed by the cells that receive the message which light has to offer, photons must first pass through the nerve tissues that act as signal transmitters to the brain. The cells that absorb light are at the back of the retina.

Given that photonic energy is altered by its substantive encounters – the fundamental nature by which vision works – how the light patterns that strike the eyeball make their way to the back of the retina unmolested is inexplicable. While retinal gel is transparent, the ganglion and bipolar cells in front of the light-receiving rods and cones are not. Incoming light is disrupted before being absorbed by photoreceptors. 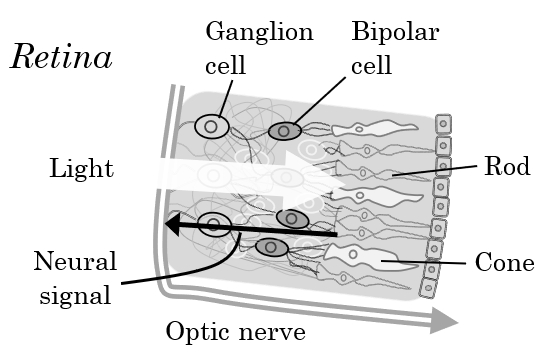 Then there is the problem of translating the photonic wavelength data into perfectly accurate information that the brain can use. Neurons are not optic cables. They use both chemical and electrical signaling. According to matterist dogma, precise light energy compositions are perfectly transcribed multiple times before the brain recreates the exact image of the outside world, which came in through the eye upside-down and backward.

“Your only high-resolution vision is in the very center of your eye – about 0.1% of your entire visual field.” ~ American neurobiologists Stephen Macknik & Susana Martinez-Conde

Then comes the problem of arranging the billions of photons received into a well-focused panoramic picture fast enough. What we see as the outside world is a massive montage, inscrutably assembled. Tens of thousands of snapshots must be collated, correlated, and exactly aligned into a seamless image in less than 1/100th of a second.

“Information that the brain receives from the eye is already out of date by the time it gets to the visual cortex.” ~ Gerrit Maus

Then there’s blinking. Humans blink their eyes about every 4 seconds. A blink lasts 1/10th of a second, and every time it happens, the eyeball moves slightly.

Yet visual imagery remains constant despite frequent outages and misdirection in eye movement. This cannot be accomplished through purely physiological means. Research has shown that there must be image consistency at least every 13 milliseconds not to detect jitter; far faster than the time it takes the eyes to blink.

The upshot is that vision is physiologically impossible. Rendering sight is an immaterial miracle.

Sleepwalkers present an intriguing paradox: although they are prone to headaches while awake, while sleepwalking they are unlikely to feel pain, even upon serious physical injury. There are many recorded instances of sleepwalkers falling and breaking bones without waking up.

It is hard to credit this happening if the brain were running the show. Only if an energy system manufactures the mind, and physicality, does this make any sense.

The Cellular Effects of Meditation

When a person experiences a stressful event, their sympathetic nervous system – which is ostensibly responsible for the ‘fight-or-flight’ response – kicks in, increasing production of NF-ĸB.

Revving the body to respond to stress is a survival instinct that tears the mind-body down when stress becomes chronic: inciting psychological problems by invigorating nattermind, accelerating aging, and causing cancer. People who practice disciplines which quiet the mind decrease production of NF-ĸB and cytokines.

“The health benefits of yoga and meditation begin at the molecular level, and change the way our genetic code goes about its business.” ~ Croatian psychologist Ivana Buric

Telomeres are the protein complexes at the end of chromosomes that protect chromosomal integrity. Telomere length is critical to health. Shortened telomeres are associated with cell aging and several disease states. Longer telomeres are thought to provide some disease protection.

After just 3 months, the telomere length of breast cancer survivors who took up meditation was maintained, while those who did not meditate suffered shortened telomeres.

Cells respond to meditation in several ways, including healthier activity and improved genetic expression. There is no physiological explanation for how quieting the mind can conjure optimal physiological activity.

“The calmness of our mind can influence gene expression.” ~ American psychologist Richard Davidson