“Nature is inexorable and immutable; she never transgresses the laws imposed upon her, or cares a whit whether her abstruse reasons and methods of operation are understandable to men.” ~ Galileo

The story of relativity began in 1632, when Galileo articulated the idea of an inertial reference frame: that the laws of mechanics were the same wherever an observer was (at constant velocity). Galileo aimed to defend Copernicus’ incipient heliocentrism.

“Since nothing prevents the Earth from moving, I suggest that we should now consider also whether several motions suit it, so that it can be regarded as one of the planets. For it is not the center of all the revolutions.” ~ Prussian astronomer Nicolaus Copernicus

Skeptics of Copernicus contended that we’d feel it if the Earth were moving. Galileo refuted this with a cogent thought experiment about being enclosed in the cabin of a smoothly-sailing ship at constant speed: “you will discover you cannot tell whether the ship is moving or standing still.”

With this, Galileo made the critical point of how easily appearance is confused with reality. Actuality is a matter of perspective, and not to be considered truth, even when sitting upon a mountain of facts.

In 1865, Scottish physicist James Clerk Maxwell opened the door to modern physics with a field theory that unified electricity, magnetism, and light. All energies supposedly travel at the same speed in ’empty’ space, but only a fraction of the energetic spectrum – what we call light  –  is visible.

(Maxwell’s and other physics theories are based upon mathematical models which presume a universal consistency of behavior. Whereas the math may be tidy actuality is always messy. The parameters of physics models are invariably based upon statistical averages. There must be a propulsion behind the incessant variety of Nature.)

This raised crucial questions. What was the medium in which these waves propagated? And light-speed relative to what? The obvious answer, by analogy of sound through air, was that electromagnetic waves disturb an unseen medium: the aether. This was a revival of an ancient idea.

“There is the most translucent kind, which is called by the name of aether.” ~ Greek philosopher and mathematician Plato

The concept of cosmic aether dated to the ancient Greeks. Plato’s student, Aristotle, proposed it as a 5th element: a divine substance comprising the heavenly spheres and bodies. The other 4 ancient elements were: earth, air, water, and fire.

The great physics hunt of the late 19th century was to spot the all-pervasive aether, which had to be so gossamer as to have no effect on celestial bodies or feathers afloat, yet stiff enough to allow a wave to vibrate through it at unimaginable speed.

“It appeared beyond question that light must be interpreted as a vibratory process in an elastic, inert medium filling up universal space.” ~ Albert Einstein

After a few decades, the search for aether failed. Einstein felt the situation “was very depressing.” Being unable to explain electromagnetism via the Newtonian “mechanical view of Nature led to a fundamental dualism which in the long run was insupportable.”

The dualism to which Einstein referred was of the classic sort: a bifurcation of existence into matter on the one hand, and powerful but ethereal energy waves on the other. Einstein wanted to somehow weld the two together into an orderly unicity.

The first step down the road of relativity was coming to grips with whether the speed of light was relative or absolute. Einstein’s thought experiments on how fast rays of light appeared to observers traveling near light-speed left him with an incompatibility of velocities. He resolved the paradox by concluding that an absolute speed of light was the only sure constant.

“Light always propagates in empty space with a definite velocity that is independent of the state of motion of the emitting body.” ~ Albert Einstein

If light was irreferential, something had to give. That something was time.

All reference frames must have their own relative time. Simultaneity depends upon the observer’s frame of reference (relativity of simultaneity), as does the passage of time, which is relative to an observer’s relative motion (time dilation). Whence Einstein’s theory of special relativity.

Space too does not get away scot-free under special relativity. It is subject to length contraction: a moving ruler that appears at rest to an observer will measure shorter than otherwise. Length contraction is only noticeable when relative motion approaches the speed of light.

In the wake of relativity, Newtonian space and time as absolutes were not only overthrown, they were reduced to an interlocked set of dimensional conduits: spacetime.

“Any opinion as to the form in which the energy of gravitation exists in space is of great importance, and whoever can make his opinion probable will have made an enormous stride in physical speculation.” ~ James Clerk Maxwell

Special relativity occurred to Einstein in 1905. A decade later, he managed to apply his field theory to gravity, thereby generalizing relativity. In doing so, Einstein proposed something indelibly bold: that gravitational fields do not just radiate through space and time, as they appear to do. Instead, gravity defines spacetime itself.

Relativity directly states that the 3 dimensions of space and 1 of time that we experience comprise a unified 4D spacetime. But it also implies that existence has an even richer dimensionality.

General relativity is a simple geometric theory of gravitation; a generalization of special relativity coupled to Newton’s law of universal gravitation. Particles are deflected when they pass near a massive body, not because of a force per se, but because spacetime around the body is warped.

Gravity manifests as a curvature of 4D spacetime. Such distortion requires at least 1 extra dimension (ED) of space; an obvious implication Einstein studiously ignored, as he was uncomfortable with the idea of reality being beyond perception. 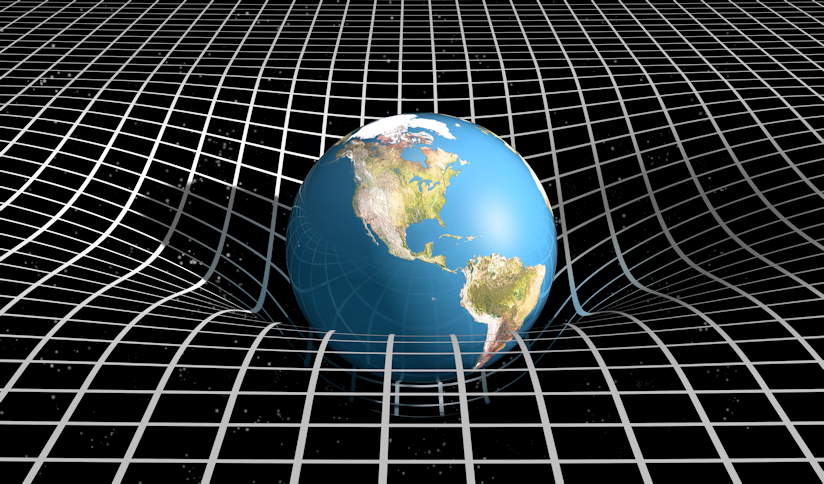 “What senses do we lack that we cannot see and cannot hear another world all around us?” ~ American novelist Frank Herbert

The interrelation between mass, gravity, and spacetime is an astonishing cosmic entanglement. Yet there is an even more mysterious aspect of relativity.

Extra-dimensionality demonstrates that the observable world is a fraction of existence; how large a fraction we have no way of knowing. What the measurable wavelengths of energy which our senses cannot experience demonstrate most clearly is that our direct apprehension of Nature is sorely limited.

“What we know is a drop; what we don’t know is an ocean.” ~ Isaac Newton