Since antiquity, the properties of light have fascinated physicists. In 1658, French mathematician Pierre de Fermat proposed that light always travels most efficiently: from one point to another in the least time, even when refracted: traveling through different media with distinct velocities, such as moving through air and then into water. This inscrutable optimality of light is a well-established fact. 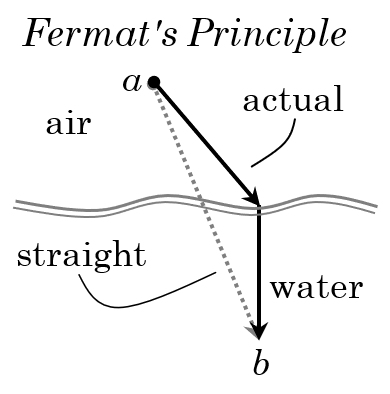 In the figure, a ray of light going from a to b would travel the least distance via the hypothetical straight line. Instead, light actually traverses a longer distance that takes less time, as light moves slower through water than air – the straight-line path would incur a longer, sluggish passage in water.

Fermat’s principle was broadened to encompass all propagating energy waves by Dutch physicist Christiaan Huygens in 1678. In 1827, Irish physicist William Hamilton took wave transmission optimality as a universal for all dynamics in any physical system.

Via mathematics, Hamilton’s principle is encompassed in all of physics. Such matchless motion necessitates omniscience: always knowing all the information in the universe.

This profundity is no casual conclusion. For any energy wave to behave as it does, all information about actuality must be instantaneously incorporated.

Optimal propagation clearly indicates a unified, coherent intelligence from the Planck level on up, and strongly suggests teleology: that the game afoot which we call Nature has intention.