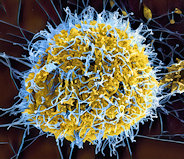 Viruses selectively edit host genetic instructions to produce the bioproducts they want as part of viral reproduction. Viruses can do this because they understand life at the molecular level.

“The capacity of a pathogen to overcome host barriers and establish infection is based on the expression of pathogen-derived proteins,” remarked microbiologist Ivan Marazzi.

Viruses cannot manufacture their own proteins and other organic essentials, which is why they go through the considerable bother to infect certain cells of select species. Once in a cell of choice, viruses need to feed suitable instructions to the machinery – ribosomes – that the host uses to build its bioproducts. One way that viruses are known to do this is through a process called “cap-snatching,” in which the virus snips the end off a host encoded message (a messenger RNA, or mRNA) and adds its own desired instruction sequence. Cap-snatching creates a host-viral hybrid message for a ribosome to read and translate into a protein.

Cap-snatching is an especially compact way for a virus to exist, as the virus need only carry for itself the genetic information necessary to extend host sequencing, as opposed to needing to lug around the entire instruction sequence. Of course, cap-snatching only works because viruses are incredibly wily: comprehending the desired bioproduct in its entirety and knowing precisely how to edit and extend a host instruction.

“Viruses take over their host at the molecular level. Some viruses can wring every last bit of potential out of the molecular machinery they are exploiting,” marveled virologist Ed Hutchinson.