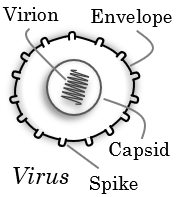 Virus may lack the machinery to replicate themselves, but they do direct their assembly. Their craftsmanship is exquisite.

Viral perfectionism is apparent in their physicality. The heart of a virus is its virion, which carries its genetic blueprints. “Virions are assembled into a highly ordered structure in the host cell,” marvels physicist Roya Zandi.

Capsids are the capsule viruses travel in for their infectious adventure. Some viruses also put on an overcoat to travel incognito, but the capsid is a virus’ body.

“Viral capsids are marvels of biological engineering. They are sturdy enough to withstand pressure exerted by the tightly packed genomes inside yet can come apart or loosen easily to release the viral genome once the virus penetrates the cell. They are also great examples of genetic economy. Because of the limited coding capacity of viruses, capsids are built by using a few proteins over and over,” explains microbiologist Ekate-rina Heldwein.

A capsid can be cylindrical or conical, but more commonly assumes an icosahedral structure, like a soccer ball. An icosahedron is a geometrical structure with 12 vertices, 20 faces, and 30 sides.

To facilitate quick construction, many viruses evolved capsids that essentially self-assemble. “Capsids became more and more sophisticated with time, allowing viruses to become infectious to cells that had previously resisted them. This is the hallmark of parasitism,” reports Pakistani virologist Arshan Nasir.

Viruses are an excellent example of how evolving intelligent design is behind even the simplest physical biological body. The natural, interactive, unified field of coherence localizes to create the exhibition we call existence.

“How a virus forms its symmetric shells,” ScienceDaily (9 March 2020).