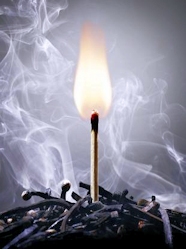 The Wicked Witch of the West has the climate report: “I’m melting. What a world….” The poles are liquefying faster than expected, because it has only recently dawned on scientists that the biosphere is a gyre. Up to now, climate models have not included feedback loops.

Under what has long been permanent sea ice in the middle of the Arctic ocean, blooms of algae are sprouting, feeding off sunlight filtering through melt pools. On land, vegetation is changing, creating favorable conditions for wildfires in the Arctic circle for the first time since apes started walking upright.

Under the Antarctic ice shelf, 1.5 million king crabs are invading areas previously barred by a barrier of frigid water. They will happily feast to extinction echinoderms (starfish, sea urchins) that have lived there without predation for tens of millions of years.

The gyre of warmaggeden is spinning up. What are political leaders of the planet doing to staunch the wounds to Mother Earth? Absolutely nothing.

Political climate-change negotiations have been ongoing for decades, to negligible effect. Talk is cheap; action is expensive. The 18th UN climate-change summit in Doha resulted in an agreement to not agree on doing anything other than pledge to do something, so as to placate the wee slice of the populace that is aware and cares about the coming demise of innumerable species, humans among them.

On the agenda for the not-to-distant future: forests dying (the ones not already chopped down), crop yields falling, drought, water shortages, mass starvation, mass extinction.

The good news: fossil fuel extraction from previously inaccessible areas means gas prices are unlikely to rise, in stark contrast to soaring food prices. While the world becomes toast, corporate profits in many sectors are likely to hold up well as chronic unemployment rises. Capitalists and their plutocratic pals in power will get by just fine, waltzing as the wildfires rage and “the little people” get lean and mean. Nero will become an unrecognized role model.

Joseph Schumpeter described the gyre of capitalism as “creative destruction.” The truth of that is writ large as global warming accelerates, thanks to free enterprise.

Note that no outcry has emanated from the captains of industry to do anything to address global warming. It’s a shame that Earth can’t issue stock options.

Ishi Nobu, Spokes of the Wheel, Book 6: The Fruits of Civilization (pre-publication).