The trend of global warming is baked in for decades because oceans absorb >90% of the thermal energy from greenhouse gas emissions. This heat atmospherically equilibrates over a 30+-year period.

Even if no more emissions were made, the atmosphere would still warm over the next 3+ decades from what the oceans have already stored. This phenomenon is marine thermal inertia. Continuing emissions can only tilt the trendline steeper, accelerating warming even more. 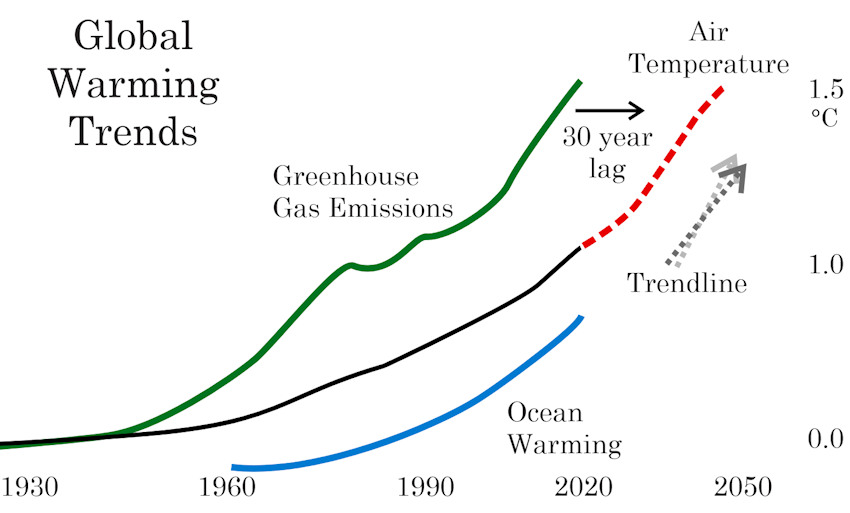 As the flow of emissions still abides, global warming can only accelerate. There are numerous feedback loops – including deforestation, widespread wildfires, lower albedo (reflection) from melting glacial ice – which ensure the tilt into hothouse.

As it is, average global surface air temperature will rise from 1.0°C in 2020 to at least 1.5°C by 2050. Some regions of Earth are warming much faster. The polar regions are already 30°C above normal.

Also expectable is severe warming over landmasses in the high latitudes, including North America, Eurasia, and Australia. Cities will especially hot up, as urban areas are heat islands.

Given the current trends, Earth’s average atmospheric warming to at least 4-5°C by 2100 is a conservative estimate. Humans will be extinct by then, as the increasingly frequent catastrophes of extreme weather events take their inexorable toll.

Data derives from the US government (NOAA & NASA), which coincides with data from the European Union and Australia.