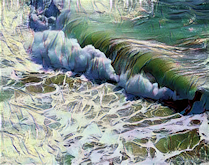 Cyclones are lasting longer on land and accelerating global warming.

The wind and rain of tropical cyclones wreak havoc on land, damaging buildings and infrastructure and flooding extensive areas. The longer a storm persists over land, the worse the devastation.

Since 1970, the average rate of decay in North Atlantic hurricanes has more than doubled, from an average of ~20 to more than 50 hours. This correlates with a similar rise in sea surface temperature.

By enhancing the speed of some ocean whirlpools and suppressing the spin of other eddies, cyclones in the north Pacific Ocean are fortifying the heat-carrying Kuroshio Current, which transfers tremendous thermal energy north.

The Kuroshiro – or Black – Current begins off the east coast of Luzon, Philippines and flows northeast past Japan where it merges with easterly drift of the North Pacific Current. The Black Current is seasonal, with its peak during the winter.

The ocean is full of energetic eddies that spin off large, fast-moving currents. These mesoscale eddies persist for a few months at a time, mixing marine waters both wide and deep. “The collision of these two giant monsters – tropical cyclones and mesoscale eddies – will probably lead to dramatic climatic impacts,” said Chinese oceanographer Yu Zhang.

As cyclones become more frequent and gain in strength, they will hasten transfer of warm tropical water to the poles via currents, accelerating polar melt and affecting sea life.

The Kuroshio’s speed is primarily linked to winds. Puzzlingly, the push of those winds has lessened by over 30% in the last 20 years. But the Black Current has not slowed much. The gain in cyclones has been why.

A faster Kuroshiro is likely to create a positive feedback loop for global warming, as the warmer water drives more intense and frequent cyclones.

A similar scenario is playing out in the Atlantic Ocean with the Gulf Stream and Atlantic multidecadal oscillation, which is a climate cycle affecting sea surface temperature.

Wrongly considered insignificant to climate dynamics, tropical cyclones have not figured in most climate models. This omission is one of several factors that render climate models conservative in their forecasts.