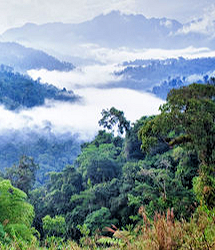 The water cycle has played an enormous role in making and keeping Earth habitable. There is a positive feedback loop among greenhouse gases and water vapor that generates a warming gyre. By trapping extra heat, greenhouse gases affect the amount of water vapor in the air. Heating the air by adding CO2 means the air takes up more water vapor, which further warms the atmosphere. Thus, greenhouse gases engender a multiplier to their warming effect.

Conventional chemistry has warm air rising and cold air sinking. But, in the tropics, cold air rises because of the lightness of water vapor. “Water vapor has a buoyancy effect which helps release the heat of the atmosphere to space and reduce the degree of warming. Without this lightness of water vapor, the climate warming would be even worse,” explains atmospheric scientist Da Yang.

That humid air is lighter than dry air is called the vapor buoyancy effect. This proclivity forms clouds and provokes thunderstorms in the tropics.

Conversely, warm, dry air sinks in clear skies, and the atmosphere emits more energy to space than it otherwise would without vapor buoyancy.

The lightness of water vapor increases Earth’s thermal emission by 1-3 watts per square meter over the tropics – equivalent to doubling CO2 in the atmosphere. The radiative effect of vapor buoyancy increases exponentially with climate warming.

Already, bouts of extreme humid heat are striking Asia, Africa, Australia, and the Americas. Humidity is more dangerous than dry heat because it impairs sweating, which is the body’s natural cooling system.

The most extreme incidents are occurring in the Persian Gulf. Slightly less extreme but more frequent outbreaks are happening across India, Bangladesh, Pakistan, north-western Australia, coastal regions along the Red Sea, and Mexico’s Gulf of California.

Scientists are surprised at the severity. “Previous studies projected that this would happen several decades from now, but it’s happening right now,” said Earth scientists Colin Raymond. The times these events last will increase, and the areas they affect will grow in direct correlation with global warming.”

While air conditioning may mitigate the impact for some in rich countries, people in poorer countries, and the poor in rich nations, will be increasingly devastated.

The current concentration of carbon dioxide in the atmosphere – 416 parts per million – equates to ~750 billion tons of carbon. Earth’s soils hold around 3,500 billion tons – over 4 times as much.

There is a strong correlation between water runoff rates and soil age. Drier conditions afford older soils which store carbon for longer. Wetter epochs result in younger, rapidly respiring soils. “Small changes in the amount of carbon stored in soils can play an outsized role in modulating atmospheric CO2 concentrations and, therefore, global climate, as soils are a primary global reservoir of this element,” remarks Earth scientist Christopher Hein.

Globally, the water cycle is speeding up as the atmosphere warms, resulting in more rainfall in the tropics. As well as engendering warming via the water vapor buoyancy effect, “this increase further accelerates respiration of soil carbon, adding even more CO2,” notes Hein.

Soil respiration is the release of CO2 by microbes as they decompose and metabolize leaf litter and other organic matter in the soil. Roots also respire at night, when photosynthesis has shut down and plants burn some of the carbohydrates they produced during the day.

Global warming is thawing permafrost soils in the Arctic, which are presently releasing over 1/2 billion metric tonnes of carbon to the atmosphere annually. There is “a similar climate feedback in the tropics,” says Hein. “Enhanced soil respiration due to greater precipitation – itself a response to climate change – will further increase concentrations of CO2 in our atmosphere.”

Colin Raymond et al, “The emergence of heat and humidity too severe for human tolerance,” Science Advances (8 May 2020).

Nina Lakhani, “Potentially fatal bouts of heat and humidity on the rise, study finds,” The Guardian (8 May 2020).