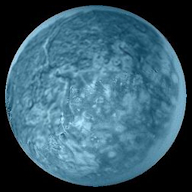 Early Earth was a water world. Continents only formed after tectonic plates got into gear.

Earth may have started dry. The planet was likely parched until water-rich asteroids bombarded it shortly after its birth. These rocks delivered lots of water; so much that early Earth was a water world.

Warmed by radioactivity, Earth’s early mantle was at least 4 times hotter than it is now. At such high temperature, the mantle could not hold nearly as much water as it does now. “The mantle’s viscosity is extremely dependent on its temperature,” notes Australian geophysicist Craig O’Neill.

The 2 minerals wadsleyite and ringwoodite store much of the water in the mantle today. They are high-pressure variants of the volcanic mineral olivine. These rocks make up 7% of the planet’s mass today. Although only 2% of their weight is water, it adds up to a lot of water.

These high-pressure rocks were far less abundant on early Earth, as they were formed after volcanic activity became a major dynamic in mantle building.

The global ocean helped kick off plate tectonics some 3 billion years ago. Water penetrated fractures and weakened the crust, creating subduction zones where one slab of crust slipped below another. Once a subducting slab began its dive, the dryer, inherently stronger mantle would have helped bend the slab, ensuring its plunge would continue. “If you cannot bend plates, you cannot have plate tectonics,” remarks geophysicist Jun Korenaga.

Life on Earth began near hydrothermal vents in the ocean 4.1 billion years ago. These vents gave a constant source of energy and warmth to catalyze reactions.

The deep ocean was relatively safe from the bombardment above, which was still ongoing. There, prebiotic evolution could have been sustained over long periods without disruption or loss of the chemical reducing power necessary for nonbiological synthesis of organic compounds. While temperatures and pressures would have been extreme, life exists there today.

By 3.5 billion years ago, Earth’s seas were cool, with temperatures not unlike recent times. Areas of the deep oceans were heated by hydrothermal pipes that vented mantle heat. Early life proliferated, adapted, and thrived, often into milder conditions than where it had begun.

In chewing rocks for sustenance, the earliest microbes were instrumental in creating the continents. Their waste products – sedimentation – acted as a viscous lubricant for tectonic plate subduction, thereby facilitating the rise of vast land masses. Without the lubricating sediment, Earth might have remained a water world, dotted with small volcanic islands.

The heat and crushing turmoil of tectonics led to melting and recrystallization of older rocks, producing a 3rd rock family (metamorphic). From these mountains were made.

Just as they had been in birthing the continents, microbes were, once again, instrumental in changing the atmosphere – providing the conditions that gave rise to entirely new forms of life: those that reveled in atmospheric oxygen rather than died from it.

Ishi Nobu, “Geology in the origin of life on Earth,” in The Science of Existence (2019).

notnegation of a word or group of wordsMore (Definitions, Synonyms, Translation)