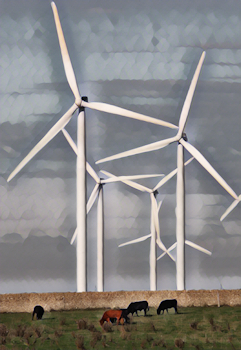 Reaping the wind has come quite a way from the windmills of yore that provided the power to grind grain. Wind power now consists of spindly propeller-driven turbines that generate electricity from gusts.

Environmental-impact studies of wind farms prior to their planting consistently underestimate the damage they do. Birds and bats succumb to the deadly rotors, including endangered species. Bats are fascinated with wind turbines, to their great peril. Though some birds are savvy enough to realize the threat whirling wind turbines pose, the construction of wind farms causes avian populations to plummet because of their habitat disruption.

The noise from wind farms is fierce. A planned facility on the coast of Germany was delayed due to the threat posed to porpoises by the din of wind turbines. A porpoise is doomed if it goes deaf.

Though the prospects of wind power are promising, the electricity to be had is limited. Wind farms must be situated in remote spots where winds are strong and consistent.

Further, wind turbines extract kinetic energy and produce a plume of low-velocity air downstream; hence wind farms must be spread out to be economic. This exacerbates the ecosystem degradation of onshore wind power.

In every country where wind energy has a presence, it is only thanks to government subsidies. As with all energy technologies, the most productive expenditure is in more efficient consumption, not more production.

The US has subsidized this blustery energy sector for over a quarter century. The outlay of taxpayer money in 2014 alone was $12 billion. That year, wind energy supplied a paltry 1.6% of American electricity. Government-sponsored wind power met 5.6% of British electricity consumption in 2014.