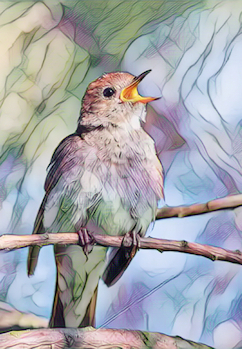 Male birds sing in the spring to defend territory and attract a mate. Vocal virtuosity during breeding season makes the difference in drawing a prime partner and intimidating rivals who recognize skill as a generalized competency. When there’s no apparent reason, what are males singing for during the winter?

Many migratory songbirds sing on their wintering grounds, outside the breeding period. Their winter songs are decidedly distinct from their springtime tunes: less refined and more variable than the alluring earworms they aim for when it’s mating season.

Thrush nightingale adults typically sing 23 to 42 songs in the spring and summer, many of which they learned when they are young. “What we love in nightingales is that they sing with so much complexity and regularity, like classical music. But winter singing is totally random vocalisation – there’s no beginning, no end. It’s more like improvising,” observed Czech ornithologist Abel Souriau.

What the nightingales are doing is listening to their neighbors (and future rivals), composing new tunes, and working through what they think will make them a star attraction when it’s showtime in spring.

Chelsea Whyte, “The New York bird with a song that may be a thousand years old,” New Scientist (20 June 2018).